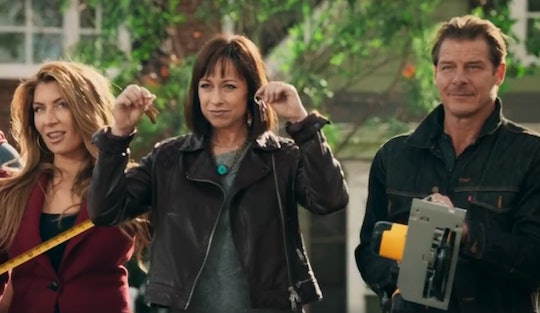 When TLC initially aired the show Trading Spaces, it was essentially the first of its kind. A new type of show, where viewers were able to peek inside the homes of regular human beings, much like ourselves, to see their homes transformed by talented and charming interior designers. With the help of the neighbor or relative or friend they were "trading spaces" with, of course. It was everything I didn't know I needed in my life, and now it seems it's coming back. And the first look at the Trading Spaces reboot is proof that some heavenly overlord loves us and wants us to be happy, because it looks just as amazing as I remember.

Since the early days of Trading Spaces, dozens of similar home renovation shows have cropped up. But it's important to remember that before there were shows like Flip Or Flop, Fixer Upper, or Property Brothers, there was pretty much just Trading Spaces. And it actually had something of an unusual twist that the more recent home design shows lack (not that I'm playing favorites though, guys... you know I love all of you). On Trading Spaces, neighbors were tasked with doing a room redesign for each other. They were paired with one of the designers, and given a budget of just $2,000 to remake the room.

The unique show, hosted by the ever-effervescent Paige Davis, showcased the talents of several designers and craftsmen (and helped launch the career of the one-and-only Ty Pennington, who went on to host Extreme Home Makeover, where he transformed the home of a deserving family free of charge and made millions of people week uncontrollably every week). And those talented people are coming back for the Trading Spaces reboot; Davis and Pennington have signed on, plus designers like Genevieve Gorder, Vern Yip, Hildi Santo-Tomas, and Doug Wilson to name a few returning faces. All of them will be wildly renovating rooms for your entertainment starting on April 7 at 9 pm EST, according to TLC.

Not to mention the neighbors who will be given "two days, two rooms, and $2,000" to create a new space for their friends. If the new trailer for Trading Spaces, which aired on Tuesday, tells us anything it's this; the brilliant people at TLC aren't planning on messing with the formula. And honestly, I couldn't love them more for it.

So what was it that made Trading Spaces so unique? Well, unlike all of the other home redesign shows out there, this time around the home owners get absolutely zero say in the renovation. Sure, they can hope against hope that their neighbors will advocate for them; but some of the designers on the show (especially the stubbornly stylish Doug Wilson) were sometimes a little too avant garde for the homeowners.

Which brings me to one of my favorite parts of Trading Spaces, though I should be ashamed to admit it; the homeowners didn't always love the result of the transformation. And they weren't above making their displeasure known.

Whether the redesign was a hit or a miss, it was always done in the most budget-friendly way possible. And host Davis told USA Today that was part of the show's appeal:

It made interior design accessible to middle America, instead of the upper echelon of society. The show has always been about being resourceful, creativity, doing the most for the least amount of money, being accessible. These are creative ideas (they) can do in their own home today.

Home renovation shows have become such an integral part of North American pop culture vernacular, it's almost impossible to remember a time when they didn't exist. But it actually hasn't been that long. Twenty years ago, we were all living in the dark. Thumbing through catalogs and clipping pictures from magazines, trying to piece together a look we could almost picture.

Then along came Trading Spaces. We were saved. Welcome back.