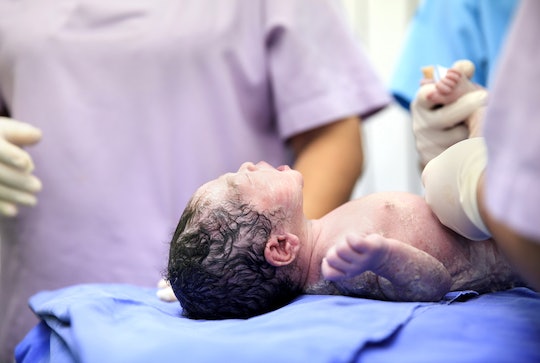 There's very good news for women struggling with infertility and uterine cancers, as the first woman in the United States to have a uterus transplant just gave birth in Dallas, Texas this week, bringing the procedure one step closer to becoming standard. The woman was part of a clinical trial at Baylor University Medical Center for women with absolute uterine factor infertility (AUI), which basically means that their uterus doesn't function or just isn't there at all.

Most of the women in this particular trial have a condition called Mayer-Rokitansky-Küster-Hauser (MRKH) syndrome, which affects about one in every 4,500 women. MRKH means that a woman's uterus doesn't develop properly and is usually diagnosed at age 16 when they don't get their period, and they spend most of their lives assuming that they'll never be able to get pregnant or have a baby, which makes these successful transplants and births such huge development. Researchers believe that the procedure could eventually work for women with other conditions, especially cancers.

Dr. Liza Johannesson, one of the doctors involved in the trial, was also part of the original team who oversaw the first birth after a uterus transplant in Sweden just last year. Since then, there have been eight other successful births post-transplant in Sweden and the ability replicate the great results in the United States means that the procedure has a better chance at becoming a real viable option for other women.

Johannesson told TIME of the Dallas birth this month, "I think everyone had tears in their eyes when the baby came out. I did for sure."

Johannsesson had moved to Texas for the Baylor program, as so many of the other women in the clinical trial have done. All of the women in the trial are between the ages of 20 to 35 years old and the donors have to be between the age of 30 to 60 years old. After the transplant, the women go through IVF treatments to get pregnant, according to The Guardian.

So far, Baylor's performed eight out of 10 scheduled transplants, and two have failed so far. There's also another woman who's pregnant after her transplant, according to TIME. A similar trial is being done at the Cleveland Clinic using only deceased donors, which is less risky than using a living donor.

Uterus transplants are not easy. The woman who gave birth, via a scheduled C-section, had a uterus from a living donor, though the trial also accepts donations from deceased women. Taylor Siler, 36 years old, is a registered nurse and mother of two kids who heard of the trial and wanted to give another woman the experience of getting pregnant.

"I have family members who struggled to have babies, and it’s not fair. I just think that if we can give more people that option, that’s an awesome thing," she told TIME. She added that she's been getting teary every time she thinks about the woman giving birth this week, though they haven't met. This experience has been as much about her as it was for the woman in the trial.

She had to go through weeks of physical and mental health screenings before even being accepted as a donor. After a five-hour procedure to remove the uterus, there are about 12 weeks of recovery, according to Baylor. (It takes another five hours to transplant the uterus in the other woman.)

Dr. Giuliano Testa, the head of the trial at Baylor and surgical chief of abdominal transplant for Baylor Annette C. and Harold C. Simmons Transplant Institute told TIME, "We do transplants all day long. This is not the same thing. I totally underestimated what this type of transplant does for these women. What I’ve learned emotionally, I do not have the words to describe.”

However, it's expensive. Even if uterus transplants become more common procedures, they can cost hundreds of thousands of dollars and like other fertility issues, likely aren't covered by most insurers since they're considered "elective," which is totally infuriating.

Baylor paid for the first 10 transplants in the trial but even the medical team is now seeking donations to continue on and do more transplants before making it a standard procedure. Testa told TIME, "The reality is that it’s going to be very difficult for many women to afford this."

Still, there's hope for women struggling with infertility or even being told right this minute that they're one of 13,500 women, according to Baylor, who are born without a uterus in the United States. Between the mind-blowing science and generosity of living donors that made this happen, it's hard to not get excited about these procedures, despite the cost.