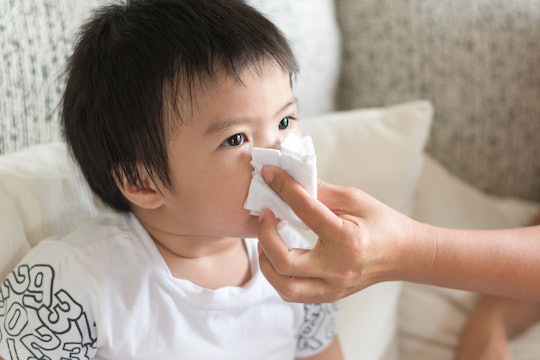 The Flu Is Causing Schools To Close In Several States

Deep into winter, many of us expect to get hit with some type of illness. It just seems to be part of this season when viruses thrive and we’re all sharing close quarters indoors. But this year, illness is so prevalent in some places that the flu is causing school closures in several states, a situation which creates hardship for many parents.

To date, at least 12 states have decided to close for a day or more because so many children and teachers have been out with the flu, according to CNN's unofficial tally of reported closures released on Jan. 25. The states CNN found to be affected by school closures include Alabama, Arkansas, Idaho, Illinois, Kansas, Michigan, North Carolina, Ohio, Oklahoma, Tennessee, Texas, and Virginia. Six additional states have also seen private schools choose to close, as CNN reported. Meanwhile, other reports indicate other states have been impacted as well.

During these closures, the schools are largely using the time to disinfect, as one district told the Philly Voice. Michele Cone, the superintendent of Clinton Township School District in New Jersey, (a state not included in CNN’s tally) said in a statement that “in order to allow our students to recover and limit exposure to illnesses, as well as deep clean and disinfect, we have made the choice to close all schools.” According to Patch, four schools in New Jersey have closed due to the flu.

Cone noted in the same statement that the state's health department was not recommending closure, but that the high degree of absenteeism and kids returning to school while sick was making instruction difficult. “Anyone with a fever must be ‘fever free’, without using fever reducing medications, for a full 24 hours,” before returning to school, Cone explained, according to ABC News.

Over in Alabama, where four school systems have reportedly closed, according The Birmingham News, Cindy Saye Wigley, the superintendent of Marshall County Schools, noted the difficulty that closures can create for parents in her announcement. “We understand dismissing school creates a hardship on many of our parents; however, the health and safety of our students must continue to be our number one priority," she said, according to The Birmingham News. "At this time, the epidemic is not only having an impact on our students but also our staff, preventing us from effectively serving our students."

One district in Michigan closed for several days earlier in January after almost 45 percent of elementary students were absent on one day, as Fox News reported. The tally was less for Boaz City Schools in Alabama — just 10 percent of students out sick — but school officials still made the choice to close schools Jan. 28 and 29, Boaz City Schools announced on Facebook last week.

According to the Centers for Disease Control and Prevention, there is widespread flu activity reported in 36 states. There has been an average of 14.8 hospitalizations per 100,000 people, with the highest hospitalization rate among those over 65 years old. In that age group, 38.3 people per 100,000 have been hospitalized, the CDC noted.

Overall there have been between 4.6 and 5.4 million medical visits for flu symptoms since Oct. 1, 2018, according to the CDC’s 2018-2019 U.S. Flu Season: Preliminary Burden Estimates report.

It’s not too late to get a vaccination against the flu, which is expected to decrease a person’s chance of getting sick by 60 percent, according to the Mayo Clinic. This handy vaccine finder tool can help you find a place to get a flu shot near you.

The flu vaccine is a quick shot and can prevent days of pain and discomfort. If you haven’t vaccinated yourself or your children, mark it on your calendar now to get it done, and keep illness (and major disruption of the schedule) at bay.