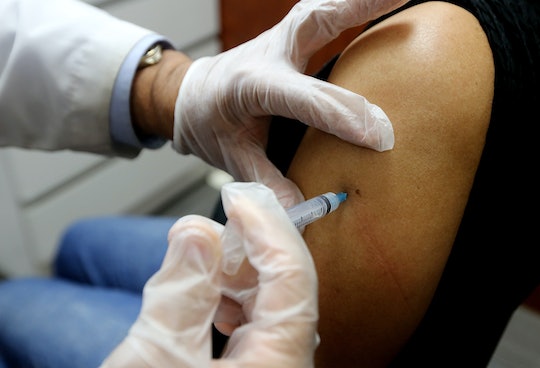 If You Haven't Gotten A Flu Shot Yet, You Need To. Like Now.

In case you haven't heard, flu season is abound — and everyone is freaking the F out. And it's not without good reason. According to the Centers for Disease Control and Prevention (CDC), researchers are seeing instances of the flu in 49 states with Hawaii being the only one left out of the loop. Yeah, so now is the time you might be wondering: Is it too late to get a flu shot?

"Those who have not gotten the flu shot yet should still do so, as it prevented 71,000 flu-related hospitalizations during the 2015 to 2016 flu season," Dr. Jann T. Caison-Sorey, associate medical director at Blue Cross Blue Shield of Michigan, tells Romper in an email interview, adding that you don't have to wait for an appointment with your primary care doctor. "Flu shots are available through primary care physicians, local urgent care centers, or retail health clinics." Pharmacy chains that offer flu vaccines include CVS, Rite Aid, and Walgreens.

The CDC recommends people get the flu shot before October, the time when flu season typically begins. But, while getting vaccinated before the flu season is in full effect is best, receiving the flu vaccine later can still be helpful, according to Kids Health.

As for the symptoms of the flu, Caison-Sorey says they are generally the same this season, "they’re just hitting harder this year and more people." Those symptoms include fever, muscle aches and pains, stuffy nose, cough, headaches, chills, fatigue and the most deadly, pneumonia. The top thing to keep in mind? "People are also waiting a little longer to see the doctor than they should be with flu symptoms," she says.

So what can you do to protect your family from the flu? "Good hand washing is vital to prevent the spread of germs," Caison-Sorey says. In addition to the flu vaccine and washing your hands, the CDC also recommends adults and children alike take other precautions to guard against the flu, including avoiding close contact with sick people.

"Influenza is a virus that is transmitted by contact and air droplets" Florida-based Dr. Yvette McQueen tells Romper in an email interview. "It is transmitted more easily during the winter months because people are in close contact more due to being confined indoors." What's worse, McQueen says, is that the virus can live on objects for eight to 12 hours. "If you touch a doorknob, handle, or rail that someone with the flu has touched — particularly after they have sneezed or coughed — and then you touch the object, you pick up the virus and then touch your face, nose, eyes or mouth. The virus is then passed along to you."

OK, want to feel even grosser about this whole thing? McQueen says the flu virus can also be passed via a sneeze, which can travel 15 to 17 feet. That means in order to avoid getting sick, you would have to keep about 3 feet of distance between you and your sneezy coworker, according to the Chicago Tribune.

In a nutshell, this flu is no joke. But it's not too late to get the flu shot if you are considering it for your family. Also important to keep in mind: Wash your d*mn hands and keep your sneezes to yourself. Oh, and although you are adored by many, you can go ahead and stay at home if you do have the flu, OK?

More Like This
Can You Mix Breast Milk & Formula? Experts Weigh In
Can Elderberry Help Prevent Illness In Kids? Doctors Weigh In
Endometriosis & Your Sex Life
What Is RSV?