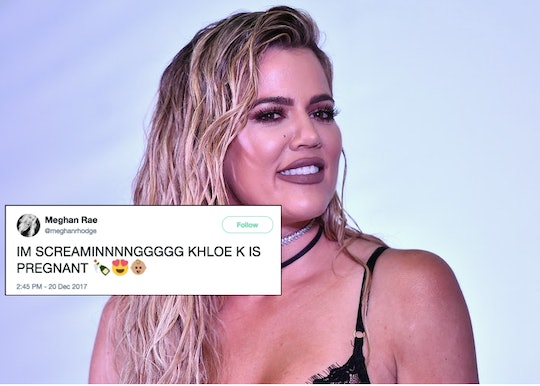 Fans Are Absolutely *Losing It* Over Khloe Kardashian’s Pregnancy Announcement

If there's one thing we know for certain it's this — fans were ready for Khloé Kardashian to announce her alleged pregnancy. Despite the fact that multiple news outlets reported that Kardashian is expecting a baby with boyfriend, NBA player Tristan Thompson, the reality star hasn't said a word about it. Until now. And fans are nearly faint with relief that the wait is finally over. These are the funniest reactions to Khloe Kardashian's pregnancy announcement, because it feels like it's been a long road to the truth. And people needed to vent.

After almost two months of speculation about her pregnancy, during which time her famous family members have been obstinately silent on the subject, Kardashian finally announced that she is, indeed, pregnant on Wednesday, Dec. 20. "My greatest dream realized! We are having a baby! I had been waiting and wondering but God had a plan all along. He knew what He was doing. I simply had to trust in Him and be patient," she captioned a gorgeous photo of her bump, adding:

You have made this experience even more magical than I could have envisioned! I will never forget how wonderful you've been to me during this time! Thank you for making me so happy my love! Thank you to everyone for the love and positive vibes! I know we've been keeping this quite [sic] but we wanted to enjoy this between our family and close friends as long as we could privately.

Kardashian added an explanation as to why she kept the news under wraps for so long. "To enjoy our first precious moments just us ❤️ Thank you all for understanding. I am so thankful, excited, nervous, eager, overjoyed and scared all in one! But it's the best bundle of feelings I've ever felt in my life! ❤️❤️❤️"

Understandably, fans are freaking out!

The Good American co-founder's decision to officially announce her pregnancy came months after her mom, manager extraordinaire Kris Jenner, appeared to confirm not only Kardashian's pregnancy but also the reported pregnancy of her youngest sister, Kylie Jenner. Kris Jenner shared an Instagram post on Tuesday featuring nine pairs of children's pajamas. The only issue being Jenner has six grandchildren, with one more confirmed on the way (Kim Kardashian West is expecting a third child via surrogate with husband, rapper Kanye West). Which had some fans speculating that the extra two pairs were meant for Khloe and Kylie.

After mom Kris seemed to let the cat a little tiny bit out of the bag, the Revenge Body host decided to come clean about her pregnancy after hiding behind loose clothes for the past two months. And thank goodness too, because fans were starting to lose their cool. I mean, seriously NSFW.

Before now, fans had to hinge all of their hopes on hints, like when Kardashian and Thompson dressed up as the Khaleesi and Khal Drogo from Game of Thrones for Halloween and she referred to him as "Daddy" on Instagram.

Now that Kardashian has confirmed that she and boyfriend Thompson are expecting, the reactions are coming in hard and fast. Because people are having some feelings about the news, and after waiting for what seemed like forever, they needed to come clean.

Some fans were especially excited for Kardashian to announce that she was pregnant; she was always the fun aunt on Keeping Up With The Kardashians, taking time to bond with older sister Kourtney's three kids (Mason, Penelope, and Reign) as well as sister Kim's daughter North and son Saint. Plus, Khloe had a bit of a scare on the last season of KUWTK when she spoke with a fertility doctor and was told she might not be able to have children, according to The Sun.

Kardashian didn't reveal in her pregnancy announcement when she is due or whether she's expecting a boy or a girl. Even without those details, I for one am almost shockingly happy for her. Congrats, KoKo.