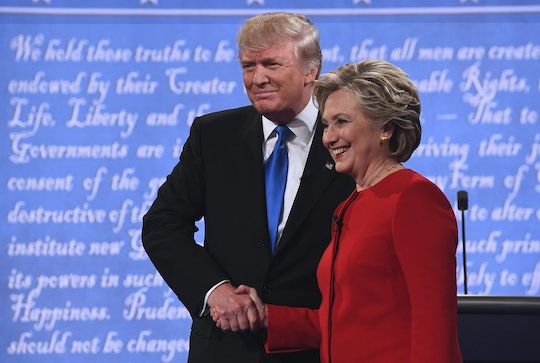 The first of three presidential debates kicked off on Monday, September 26, and, before we even got past opening remarks, the Twitter-verse seized upon Donald Trump's apparent case of the sniffles and used it to mock his campaign's relentless questioning of his opponent's health. The funniest tweets about Donald Trump's sniffling gave him a taste of his own medicine.

It's unclear what had Trump sniffling so hard, but it did seem to ease up as the debates went on. Unfortunately, the debates were an uninterrupted 90 minutes of questioning by Lester Holt, which NBC chose to air with a split screen framing, so Trump literally never got a moment off-screen to take care of his runny nose.

His signature debate tic during the primaries was his excessive sighing, which, while it also made an appearance at these debates, was not his most distracting fidget at the first presidential debate. The sniffles were most prominent during his opening statements, during which he inserted them after almost every single word. Of course, the irony here is rich, considering how swiftly he dug into Hillary Clinton when she began to show signs of fatigue on the campaign trail in the weeks leading up to the first debate.

After nearly fainting on a hot day while making an appearance at the 9/11 Memorial on September 11th, Clinton's campaign released the information that she had been struggling with a pneumonia diagnosis. Trump supporters basically considered this tantamount to a death sentence. Since it followed bizarre conspiracy theories about Secretary Clinton's "stamina," thanks to Trump pointing out that she often keeps a chair on stage during speeches and appearances (just in case she needs to take a break), the pneumonia diagnosis only fueled speculations about whether Clinton was "healthy" enough to be president. Clinton supporters seized on Trump's minor case of the sniffles to turn the tables.

But on a more serious note, even MSNBC hosts commented on Donald Trump's distracting fidgeting following the debates. Said Rachel Maddow, with regards to how part of being president is being able to withstand tedious appearances gracefully:

"We saw the split screen the whole night. I thought it was bizarre. When [Brian Williams] said there were two different conversations going on, part of that was physically. [Hillary Clinton] held still, watched him or took notes, very occasionally responded visually to what he did. He was like a jumping bean. He never stopped moving: the one-word interruptions, the leaning into the microphone, the drinking water, the sniffing, the moving around, the grimacing, the sighing...that physical behavior for 90 minutes was worrying."

It's true that Trump's nerves showed through his physical behaviors. But using either Hillary Clinton's health or Donald Trump's physical tics to question their ability to lead is an outdated, ableist political critique. To say that questioning a candidate's health is "legitimate" raises serious concerns about who we believe has the right to lead, and it underscores the troubling lack of access disabled folks have to leadership positions.

Making fun of Trump's sniffles was a great opportunity to highlight the hypocrisy of his campaign. But ideally, one day, we can move away from a focus on candidates' physical prowess altogether.