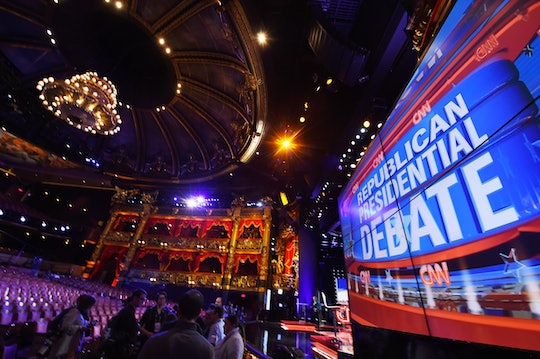 The Funniest Tweets About The GOP Debate On CNN, Because There Was A Lot To Joke About

The most recent GOP debate took place on Tuesday night, and while the event itself happened in Las Vegas, Nevada, the best action was, of course, only available online. The Internet watched intently and, as always, commented on the debate by sending out the funniest GOP debate tweets we've seen all year. It's as though the Good People Of The Internet realized that if we had to sit through yet another night with this many candidates, we damn well better entertain ourselves by saying hilarious stuff about it. Nine candidates appeared on stage to (at times) engage in sometimes friendly, sometimes not so friendly discourse, and, yes, Twitter had something to say about it. Actually, Twitter had a lot to say about all of it.

Of course, Twitter users took absolutely zero mercy on GOP presidential hopeful Donald Trump, who stood center stage as the frontrunner for the Republican nomination. Trump seemed to be the main target of liberal and conservative Twitter alike, although his fellow candidates were definitely not immune to the Internet's whit, humor and all-too-painful truths.

From Democrats to comedians, famous actors and actresses to the run-of-the-mill American citizen, here are the best gut-busting GOP debate tweets, because if you don't laugh at this seemingly unending dumpster fire, you'll surely cry.

Get it? Never going to happen.

I think this one speaks for itself.

My vote is Carly.

The debate went so long, this feels too true:

Have you heard? The GOP will keep America safe.

Although Sen. Lindsey Graham was delegated to the JV debate, this tweet was definitely worth a mention. On fleek!

Because that's what they do best.

Come on now, no body shaming. Even if the resemblance is striking.

I adore you Michael Ian Black, but let's focus on the issues not the fashion, shall we?

Aw, leave the innocent out of this.

The machismo in the air is waaaay to thick for me.

Who doesn't love a puppy? Probably these guys.

Personal space is not hard to understand, guys!

Again, body shaming is not a cute look, Internet.

I smell a rat!

What exactly are our nation's priorities?!

Indeed, he did, people.

Hmm, what you talkin' about?

For real. Let's get rid of the First Amendment.

Eh, you got a little questionable in some spots, Internet, but all in all, a very pleasing performance! Bravo. See you kids in 2016 when this horrible shit-show continues.