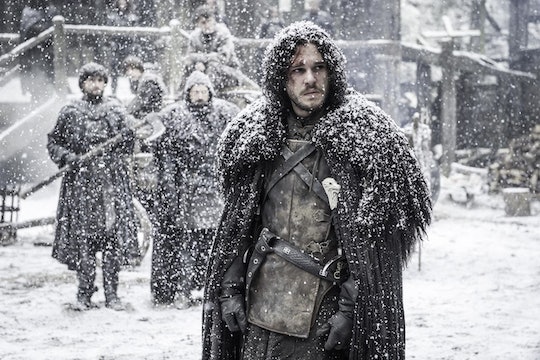 The 'Game Of Thrones' Season 7 Release Has Been Announced, & It Will Be A Very Long Winter

Remember how there were rumors floating around for, like, ever about Game of Thrones having just two seasons left that would both be shorter than usual and how we all hopes and prayed to the Many-Faced God that both claims were untrue? Well, not only will be get just seven episodes next season on Game of Thrones, but we will be waiting a lot longer than usual to get them. The Season 7 release date of Game of Thrones is going to be summer 2017. That's right, instead of the usual April premiere month, we will be waiting out the longest winter of our lives for the second to last season of Game of Thrones to begin. It's sort of fitting, since winter has finally come on the show, after a summer that lasted for years, but that doesn't make it any easier for any fan to handle.

Showrunners David Benioff and D.B. Weiss revealed in an interview with Variety in April that Game of Thrones would conclude as a series with just two more seasons made up of a total of 13 episodes, which came as a double shock because Game of Thrones is easily a show that could last into the double digits of seasons and 10 episodes per season was never enough, let alone six or seven. At the time, Benioff said "Nothing is set in stone", but like Jorah's greyscale, this is very real and not changing anytime soon.

Season 6 of Game of Thrones left off with a victory for the Starks, Jon Snow's true parentage finally pretty much revealed, Cersei on the freaking throne, Dany actually making her way to Westeros, and Littlefinger eyeing Sansa like he has plans to change everything. Which, let's be honest, he probably does. But we're going to have to wait a year from now to see any of this play out. Not a year from the Season 6 premiere, or even a year from the Season 6 finale of Game of Thrones, but an actual year from the summer we are currently in. We all love how House Stark talks about winter coming, but this just means our winter is going to feel several months longer than usual.

Also important on the docket of Season 7 of Game of Thrones, is the fact that some of Season 7 will be shot in Iceland, which hasn't been used since Jon Snow was north of the Wall, and that can mean a number of things for the future of Westeros. Maybe the White Walkers are going to somehow get over the Wall, or Jon will find Bran beyond it, all Three-Eyed Raven-y and whatnot. If winter has come to Westeros, then it could mean that the White Walkers will be coming too.

The beauty of Game of Thrones coming back to us in the spring (other than the fact that it was there for our viewing pleasure) was the fact that it acted as a way to melt the snow and give us something amazing to watch as network TV shows came to an end for the season. But now we have to wait for summer 2017 for Season 7 of Game of Thrones. I'd say that by then we'll have forgotten about the most important story lines and characters, but let's be real, no matter how long they make us wait, we'll all be flocking to our TVs, tablets, and computer screens to catch the Season 7 premiere of Game of Thrones. At this point, they can do pretty much whatever they want to us. And this just gives us extra time to re-watch the entire series before the next season begins, right?

Okay, so basically it's impossible to find the good in waiting until next summer for the Game of Thrones premiere of Season 7, but maybe we can take some comfort in the fact that if there are truly just 13 episodes remaining of the entire series, they should all be raised to the caliber of "Hardhome" or "Battle of the Bastards." Not that any episode of Game of Thrones has ever felt like a filler episode, but I'm trying here. Maybe they'll even repay us for this long wait by finally letting Tyrion finish his joke about the honeycomb, jackass, and brothel. Maybe.