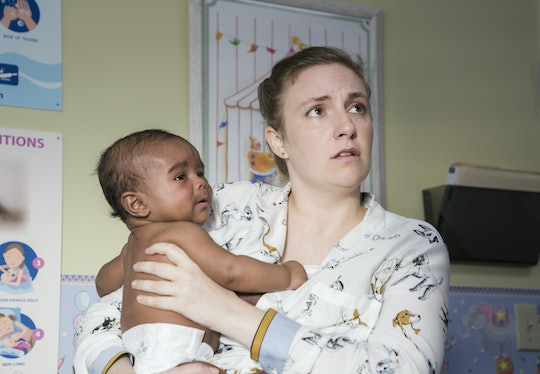 Many women loved the HBO series Girls because of the absurd situations the infantile Hannah (played by show creator Lena Dunham) always found herself in. But during the final season, the show grew up along with Hannah after she discovered she was pregnant and decided to make the brave and unexpected choice to become a mother. In particular, the series finale of Girls focused on the chaos of new motherhood, with a perfectly absurdist Girls-esque slant.

In Girls, Hannah's pregnancy only lasts a few episodes, but in that time, she makes a lot of big life decisions. She has to figure out which of her friends are going to be in her life. She has to decide if she's going to co-parent with the baby's father, or if her ex-boyfriend Adam is going to be in her life. Instead, she decides to move out of the city for a job and to raise the baby alone. But in typical Girls fashion, she's not remotely prepared for the unpredictable nature of new motherhood.

When we meet Hannah's baby Grover, he's already a few months old, but she's still in the trenches of early motherhood. While she initially planned on breastfeeding, after a month, Grover just stops latching, only accepting milk from a bottle. As any mom who's struggled with trying to get their baby to latch knows, nursing strikes like these are fairly common. But Hannah views it as a sign that her baby has rejected her.

Hannah consults with a pediatrician, who shrugs off her struggles and says breastfeeding is just something that doesn't work for some people. In addition to the lack of concern from her pediatrician, Hannah also has to deal with pressure from her best friend Marnie, who is contemptuous toward "formula fed" babies and encourages Hannah to give Grover "liquid gold."

While the show doesn't take a side on the endless breastfeeding versus formula debate, it's spot-on in its depiction of the feelings of guilt and inadequacy Hannah struggles with over her inability to nurse.

Like Hannah, it was difficult to reconcile my pre-baby self with my new reality.

Like any mother, Hannah wants what's best for Grover, and she's committed to making breastfeeding work, regardless of the obstacles that present themselves. And that's the way motherhood is sometimes: Even though things don't always turn out the way you envision them, it's hard to let go of your previous views.

Unlike Hannah, I didn't struggle with breastfeeding. But when my first child was born, my commitment to attachment parenting got in the way of those first few months together. I never put him down. He slept on me for his naps. He slept next to me at night. He was always by my side, because the thought of him waking up and finding himself alone was excruciating for me.

I had prided myself on my ability to swoop in and address my child's needs as soon as he had them, which is at the core of attachment parenting. But after developing a severe case of postpartum anxiety and then developing panic attacks, I realized that as a result of my clinging to my son, I had no life whatsoever outside of my baby. Like Hannah, it was difficult to reconcile my pre-baby self, which had believed that attachment parenting was the right thing for me, with my new reality, which was that of a parent who was completely overwhelmed.

By the end of the episode, Grover finally latches onto Hannah's breast. It doesn't necessarily mean that she's got the whole motherhood thing figured out, but it does prove that no matter what happens, both he and she are going to be OK.

That, too, is a reality of motherhood. In the midst of my postpartum anxiety, it was hard getting to the point where I could say with total assurance: "I'm a mother who does the best I can for my kids." But with the help of my circle of mom friends, as well as from regular therapy, I got there.

Motherhood may be messy and complicated and a total blur at times. But in the midst of all the chaos and self-doubt, there are always moments of connection and comfort that make us realize how much of a gift it truly is.