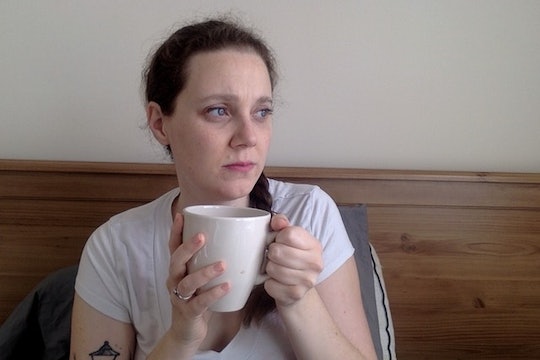 My Midwives Told Me I Was "Fine," But I Had PPA

When I was pregnant with my first child, I saw a practice of midwives. I really loved each midwife I saw, but in many cases I only had one or two prenatal visits with each one, so I didn't get to know them that well. I can't help but wonder now, looking back, if I had known them better or if they knew more of my history with panic disorder and agoraphobia, would they have diagnosed me with postpartum anxiety?

Hindsight is 20/20, and I now know without a doubt that almost immediately after my son was born I was suffering from postpartum anxiety, depression, and OCD. But at the time, it was hard for me to know if how I was feeling was out of the ordinary. My instincts told me they were, but when I asked my midwives about it, they chalked it up to "baby blues" and normal new-mom adjustment. In fact, they felt like I was thriving as a new mom. When they looked at me, they saw that breastfeeding was going well, that I was bonded to my baby, and that I didn't seem to get worked up or worried about whether or not he was eating enough or pooping enough or any of those things. I think they saw my trust in the process of birth and in my own body to provide for my baby and assumed that it meant robust mental health. But I felt off, even though I couldn't quite verbalize what had me feeling that way. So when they told me it seemed like I was doing great, I believed them.

I know now that postpartum mood disorders don't always look like a weepy, bedraggled woman who can't deal with her baby. I was only occasionally weepy. I still had help from my partner and my mother, so I could shower and I was fed. But I wasn't sleeping very much. And it wasn't because my baby wasn't sleeping. It was because I couldn't sleep when he slept, despite all the advice to do so. When he was asleep, I felt like I had to be vigilant, that I had to watch him, to make sure he was still breathing. My OCD had nothing to do with hand-washing or having anything be a certain way, but it had everything to do with very intrusive thoughts about the safety of my baby. I could not shut off the "what if he dies?" thoughts — not to sleep, not to do anything else resembling self-care.

As a result, my partner constantly heard that he wasn't doing anything right. I could not stop myself from swooping in and scooping up my baby at even the first sign of a cry. I basically excluded my partner from bonding with our son. And because of this, I shouldered all of the parenting responsibilities.

But from the outside looking in, I knew I seemed like I was managing it. I posted rosy pictures full of happiness to Facebook. I was confident in breastfeeding. I did so in public without any worries. The pediatrician assured me that my baby was thriving, gaining all the weight he should be and then some. I really, really bonded to my baby. I loved him. I responded to the slightest cue he gave me. I didn't let him cry. I was so vigilant, I could put him to the breast, or change his diaper, or snuggle him before he ever had a chance to get upset. He napped best when I held him. So I held him all the time.

My partner was more comfortable letting him cry for a minute. My son didn't enjoy being cold, so every time we had to change his clothes, he'd get upset — except when I changed him. I'd make sure he was warm, under a blanket or on my chest. I'd pause to breastfeed him if he got truly upset, because that always soothed him. As a result, my partner constantly heard that he wasn't doing anything right. I could not stop myself from swooping in and scooping up my baby at even the first sign of a cry. I basically excluded my partner from bonding with our son. And because of this, I shouldered all of the parenting responsibilities.

I normalized my experience. I decided that all the claims of "motherhood is the world's toughest job" meant this: Motherhood is excruciating and you can love your baby, but it can still make you miserable.

Even when I saw a midwife for my postpartum visit at six weeks, I wasn't sure I was suffering from anxiety. It was wildly different from how the anxiety manifested itself prior to becoming pregnant. But then, my whole life was completely different than it was before. My anxiety before the baby was like this constant sick feeling, but there were also these jagged peaks of panic attacks. I had specific things I feared: car trips, public transportation, crowded restaurants, waiting in lines. But my postpartum anxiety was different. It was just worry and fear and excruciating emotional pain when my baby cried. I wasn't having panic attacks. So I guessed I was OK, and my care providers took my word for it. Even though at one week postpartum I called them and said I wasn't sure how I was doing, the questions they asked me then convinced me I must be OK. I remember talking to one of the midwives. My son was breastfeeding in the background and the midwife could hear his noisy gulping on the other end of the phone. She asked how breastfeeding was going, and I could happily say that it was going really well. And, yes, I was happy about that. I probably sounded very happy about that. When we ended the call, the midwife told me to call them again if I continued to have concerns over my mental health.

I probably should have called them again. But, instead, I normalized my experience. I decided that all the claims of "motherhood is the world's toughest job" meant this: Motherhood is excruciating and you can love your baby, but it can still make you miserable.

It wasn't until I had my second baby that I realized just how much I had suffered after having my first. I never once felt like I had to watch her or she would die. I was able to sleep. I loved her just as much as I loved my son, but it didn't set my teeth on edge to hear her cry for a moment. I actually enjoyed her first year.

It wasn't until everything ramped up to the point that I was having full-blown panic attacks that I sought more help. I began therapy and resumed taking the antidepressants I'd only needed for a few months before. I had totally weaned off of them a few months before I got pregnant but it was clear when the panic attacks started that I needed the extra help to convince my brain that I was OK.

Even then, I still believed what I'd been told before: none of this was postpartum depression or anxiety. In fact, it wasn't until I had my second baby that I realized just how much I had suffered after having my first. I never once felt like I had to watch her or she would die. I was able to sleep. I loved her just as much as I loved my son, but it didn't set my teeth on edge to hear her cry for a moment. I actually enjoyed her first year.

One of the reasons I always want to share my story with postpartum anxiety is because it doesn't look like what people think it might. Because if someone had said that postpartum mood disorders could be totally different from my previous mental health disorders, I might have realized I was struggling. If someone had told me that it shouldn't feel like emotional torture to hear your baby cry, I might have delved deeper into how I was feeling when I spoke with my midwives. I might have had the courage to insist I wasn't well. I might have spoken with more confidence that I didn't feel well. I might have enjoyed early motherhood a lot more.

I sometimes wish I could go back to that time and insist on speaking with a therapist, or I wish my midwives had given me more information about the wide variety of mood disorders that surface in postpartum mothers. And, honestly, that whole time is now sort of a blur. I remember feeling an incredible high right after he was born. I also remember coming off of that high and feeling terrible. But mostly, I remember how awful it felt to be driving with my son in his car seat crying. It was the only time where picking him up and nursing or snuggling him wasn't an option. I dreaded driving him anywhere, and found any excuse not to. I wish that it'd been a clue; that anytime I started avoiding everyday activities I would realize that that is a red flag.

In the upheaval that new motherhood brings, I needed someone to help me sort through what I was feeling. There were just so many emotions; and many of them were so, so great! I really loved my baby. I really felt awesome that I had carried him, birthed him, and fed him. I was proud when he hit his milestones. I laughed when he giggled. But I was also deeply unhappy and scared. I needed someone to suggest that new motherhood didn't have to be that way. Because I know now that it doesn't.