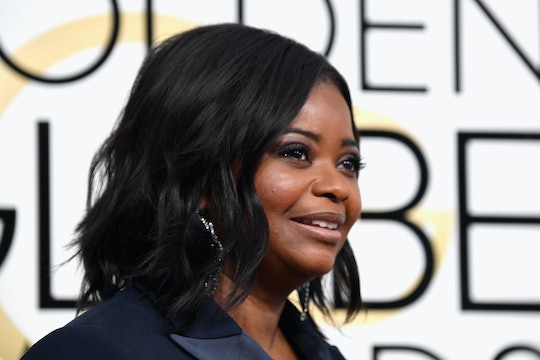 What All Awards Shows Could Learn From The Globes

The beginning of every awards season tends to double as the beginning of an endless string of red carpets, touching speeches, memorable moments, and one glaringly obvious problem: a lack of diversity in media. The 74th Annual Golden Globe Awards has, thankfully, arguably set the inclusion bar a touch higher than years past. However, while the Golden Globes diversity inclusion is something other award shows should be following, it's simply not enough. America's entertainment industry shouldn't be relying on the Hollywood Foreign Press Association to pat itself on the proverbial back. It shouldn't require a group of individuals from around the world to, once again, fill in the obvious spots in which we — as a society, which has collectively and continuously failed to demand better of its media — are lacking. Instead, the change to openly, unapologetically, and consistently diversify media in America should come from within.

What was once considered to be nothing more than a "joke" of an awards ceremony, applauded for providing shameless gossip and a chance to watch our favorite actors make drunken fools of themselves, the Golden Globes has transformed itself into something of a trend-setter in the awards game industry. While the Academy Awards continues its attempt to recover from its #OscarsSoWhite past, the Golden Globes has managed to curtail itself as an inclusive and diverse celebration of the best talent the entertainment industry has to offer.

The 85 voting members of the Hollywood Foreign Press Association nominated six black actors — Denzel Washington and Viola Davis for Fences, Mahershala Ali and Naomie Harris for Moonlight, Ruth Negga for Loving, and Octavia Spencer for Hidden Figures — this year. Honestly, it seems somewhat ridiculous that "six" is a high number when discussing the number of people of color who are being celebrated for their artistic achievements, especially in 2017. Then again, the United States is staring a Donald Trump presidency in the face, one where his impending cabinet will be the richest, whitest, most male cabinet this country has ever seen. In other words, those who celebrate the beauty in differences are taking their wins when and where they can get them. And this year, that includes the Golden Globes.

A step in the "right direction" is a step that should have been taken years and years ago.

The Golden Globe awards ceremony didn't stop by simply diversifying the nominees, either. The list of television shows and movies nominated provide a wide variety of stories, highlighting women, people of color, and even diversity in motherhood. For example, 20th Century Women highlights the story of a single mother in the late '70s, raising her son in a notoriously unconventional way with the help of equally unconventional women. The film was nominated for Best Motion Picture - Musical or Comedy, and Annette Bening secured a Best Performance By An Actress In A Motion Picture - Musical or Comedy for her stunning and profound portrayal of Dorothea Fields.

Of course, Hidden Figures — the true story the black women and mathematicians who were responsible for launching John Glenn into space — was nominated for two awards: Best Original Score, and Best Supporting Actress In A Motion Picture - Musical or Comedy for Octavia Spencer's performance. The inclusive combination of the stories being told through television and film highlight that not only is it important to put women and people of color in front of the camera, it's important to highlight their lives, too.

Still, it seems that a step in the "right direction" is a step that should have been taken years and years ago, and by an award show that isn't powered by a foreign association. The Academy of Motion Picture Arts and Sciences, a global brand with over 17 branches, is an American organization notoriously lacking when it comes to diversity in both their membership and in their nominees. After the #OscarsSoWhite backlash, an online movement created when only white actors and actresses were chosen for the top four categories for a second year in a row, the Academy invited its largest and most diverse set of new members in its over-90-year existence. Out of 683 industry professionals invited to join the academy, 46 percent female and 41 percent people of color. Of course, whether or not that change in representation presents itself in the nominee list, remains to be seen.

Until the rest of the award shows this country celebrates (and the media our society endlessly awards) steps up and accurately represents the diversity this country prides itself on, we have to look to the men and women paving the way with a fearlessness the likes of which we simply do not deserve.

Of course, the entertainment industry itself seems to be lagging behind the Golden Globes, too. While the Globes' nominee list is clearly more inclusive than most, it's still not inclusive enough and, perhaps, it's the number of women and people of color being offered roles in block-buster, prominent films that's to blame. After all, in the wise and timeless words of Viola Davis' historic Emmy acceptance speech, "You cannot win an Emmy for rolls that are simply not there." Out of the 100 films in 2014, only 17 of the top movies featured people of color in lead or co-lead rolls. Until a fundamental change occurs in Hollywood itself, awards shows will be have no choice but to be forced to repeat a whitewashed past again and again and again, no matter how much we tire of it.

Until the rest of the award shows this country celebrates (and the media our society endlessly awards) steps up and accurately represents the diversity this country prides itself on, we have to look to the men and women paving the way with a fearlessness the likes of which we simply do not deserve.

Just like Tracee Ellis Ross said during her acceptance speech this year:

This is for all of the women, women of color, and colorful people, whose stories, ideas, thoughts are not always considered worthy and valid and important. I see you.

We may not see you on our television screen or movie theatre screens as often as we need to or want to, but we do see you.