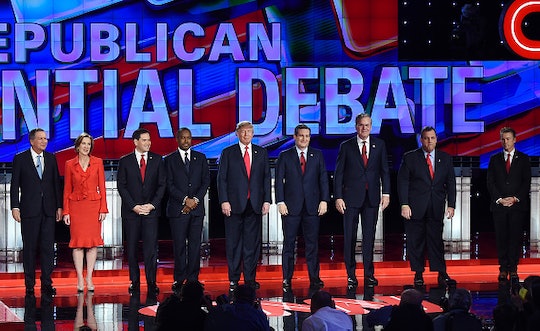 The GOP Candidates Are Tweeting About The ABC Democratic Debate, & It's Just What We'd Expect

Saturday night's ABC Democratic Debate, hosted by Saint Anselm College in Manchester, New Hampshire and the last presidential debate of 2015, was watched by not only potential voters, but by potential GOP Presidential Candidates. While Hillary Clinton, Bernie Sanders and Martin O'Malley debated hot-button issues, some of the Republican candidates weighed in via Twitter, sending out their thoughts, criticisms and own political plans in 140 characters or less.

The big-time Republican candidates were nowhere to be found (until the very end of the debate), but that didn't keep other, less likely-to-succeed candidates from speaking their mind the moment the debate began. Perhaps Republican front-runners like Donald Trump, Marco Rubio and Ben Carson were still debriefing from the 5th Republican Debate. Perhaps they had better plans on a Saturday night than watching their three biggest presidential adversaries. Perhaps they were just waiting to speak until they formulated well thought-out responses (which, if we're using past debates as a reference, would be a first).

Regardless, Rick Santorum was the first to weigh in, commenting on George Stephanopoulos' attire during the pre-debate show. But Santorum didn't stop there. Not too long after the Democratic Debate began, Santorum turned his attention to Hillary Clinton and her understanding (or lack thereof) of ISIS and potential terrorist enemies.

It's somewhat interesting that Santorum is, to date, the most vocal GOP Presidential Candidate. According to the recent National Republican primary polls, Santorum holds less than 1% of voters.

Of course, not too long after Santorum sent out a variety of tweets, Jeb Bush joined in, voicing his disapproval of the Democratic nominees and their stances.

And finally, towards the end of the Democratic Debate, Donald Trump decided to chime in. He mostly re-tweeted his supporters, but he wasn't above sending his own tweets, voicing his disapproval of Hillary Clinton, her policies and her debate performance.

Like I always say, it wouldn't be a 2015 Presidential debate without the other side (aka Donald Trump) chiming in.