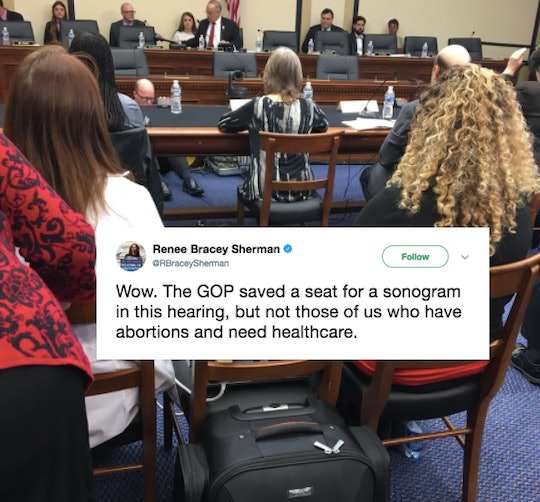 House Republicans continue to push their anti-choice agenda, moving forward with a new law that would ostensibly ban abortions from 6 weeks on. And how did they go about proving this point? At a recent abortion ban hearing, the GOP brought a sonogram. The sonogram even got its own seat at the hearing. Because apparently, an inanimate object has more to say than an actual human woman, considering it has front row seats to an important judiciary hearing about women's rights.

In recent months, the Republican Party seems to be waging a war against women's reproductive rights. At the beginning of October, the House of Representatives voted to ban abortions at or after 20 weeks of pregnancy. And now, House GOP members are going even further; on Wednesday, a judiciary committee held a hearing to discuss the "Heartbeat Bill" drafted by Iowa Rep. Steve King. This bill, called H.R. 490, would call for abortions to be banned the moment there is a detectable fetal heartbeat, around six weeks. In other words, it would ban abortion before most women even know they're pregnant, according to Teen Vogue. King spoke to The Hill during the hearing, which was held in front of the House Judiciary Committee's Subcommittee on the Constitution and Civil Justice, saying:

It is important that Congress passes such a strong pro-life bill now because President Trump will hopefully appoint one or two more justices to the Supreme Court, making this a profound moment in the pro-life movement.

To really drive that "profound moment" home, House Republicans decided to try their hand at some theatrics. They saved a seat at the meeting for a sonogram, symbolizing their apparent utter disinterest in the health and well-being of women's reproductive health care in favor of an inanimate object.

Romper has reached out to King for comment and is awaiting a reply.

The bill was initially introduced in January; it was not given an official hearing date, until recently. After 10 months, the bill has now been put before a judiciary hearing. Perhaps because the bill was so extreme and so polarizing; this proposed bill would make it a federal crime for doctors to perform abortions, according to Congress.gov:

So physicians who perform abortions after six weeks could find themselves charged if this bill is passed into law. Beyond that, H.R. 490 does not provide any allowances for women who are the victims of rape or incest. There is only one provision, according to The Hill.

It provides an exception for an abortion that is necessary to save the life of a mother whose life is endangered by a physical (but not psychological or emotional) disorder, illness, or condition.

One wonders what the sonogram with premium front row seats at the judiciary committee has to say about that?

That's right; nothing. Because it's not an actual person. Unlike women who have actually had abortions, a sonogram machine does not have a horse in this race.

Women, on the other hand, have all the horses in this race.

Like Robin Utz of Washington, told Al Jhazeera News of the heartbreaking decision she had to make to abort her fetus, who was suffering from a rare kidney disease and would not survive. She told the news outlet:

I don't feel ashamed of any of it. Abortion doesn't have to be a shameful thing.

Or Stephanie L. of Florida, who told Fierce:

My life changed when I was 17 and I had to ask a judge for permission to exercise my right to bodily autonomy and have an abortion. The judge approved my judicial bypass and I felt liberated to live out my dreams on my terms. I continued with my university program and graduated with two Bachelors at the age of 20 and succeeded in earning my Master’s of Social work three years later. Now I advocate for reproductive justice and share my abortion story to combat stigma about abortion and the folks who have them.

New York Rep. Louise Slaughter, co-chair of the House's Pro-Choice caucus, was on hand at the judiciary hearing on Wednesday to voice her concern for this proposed bill, according to The Hill. Slaughter pointed out:

This bill is not about science or facts. It is just another case of men who don't think women have the right to control their own bodies. This legislation is blatantly unconstitutional and it's time to stop the bans.

The reality is, the sonogram sitting front row center at this hugely important hearing was nothing more than a distraction tactic — an attempt to deflect attention away from the millions of women whose lives would be negatively impacted by an abortion ban. While a committee spokesperson would not clarify whether they will vote on the bill soon when asked by The Hill, it's important to remember that this bill would most certainly be challenged by the Supreme Court, according to The Guardian.

And it's perhaps more important than ever to contact your representative and make your feelings known. Because this bill cannot happen.

No matter how many decoy sonograms might be sitting in the front row during hearings.