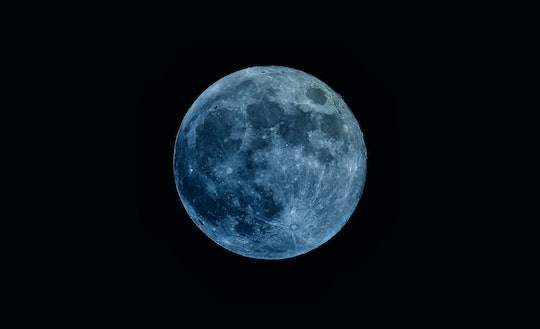 There's Going To Be A Halloween Blue Moon — This Year Just Keeps Getting Weirder...

There’s something about a full moon on Halloween that helps set the stage for a howlingly good time. So even though 2020 has kind of tanked so far, there is one cool astrological event that’s coming on All Hallow’s Eve, and that’s the appearance of a Halloween blue moon in the night sky.

As it turns out, a full moon on Halloween night is as rare as seeing The Great Pumpkin. In fact, the last one occurred on Halloween 2001, and it’s not expected to appear again until 2039, HistoryCollection.com reported. And it’s even more uncommon to have a blue moon, which is a term that signifies the second full moon within the same calendar month, according to Space.com. Since there are about 30 days between full moons, having two in one month is an odd occurrence indeed. (That might explain where the expression “Once in a blue moon” comes from.)

During the month of October, there will be two full moons. The first, a Full Harvest Moon, will occur on October 1st. The Harvest Moon sometimes appears orange because of its proximity to the horizon, which makes it (and any full moon, really) seem to loom larger and more colorful in the sky, Earthsky.org reported. And since it appears in the fall —and the season of pumpkins and all things orange-hued— that probably plays a role in how our eye interprets the color of the moon. The second will be the blue moon, appearing in the night sky on Halloween.

So, the big question remains: is a blue moon actually blue? Not really, reported Nasa.gov. Still, there were two reported incidents of “blue moons”— the first in 1883 when Krakatoa, an Indonesian volcano erupted and spew ash into the sky that made the moon appear blue, reported Skyandtelescope.org. (The other incident happened in 1927, when Indian monsoons blew dust up into the atmosphere that caused the moon to become blue.)

Beyond seeing a sky full of stars, does the blue moon mean anything for individuals? It just might, according to Jeff Harman, an astrologist in West Hils, CA. “The Halloween blue moon ought to be eventful!” he says in an email. “This one is happening just before the November election as the full moon exactly conjuncts Uranus with the sun in opposition to the moon, which is a recipe for unexpected, unusual, and bizarre events.” The moon has been known to affect people’s mood, so be prepared for feeling perhaps a little… peculiar. “People will feel anxious, so be careful driving and watch for unusually explosive events,” Harman advises.

Still, it’s exciting to have a full moon on Halloween, whether it’s blue, orange, or its typical gray-ish color. And hopefully, the Halloween blue moon of 2020 brings only treats — and no tricks.