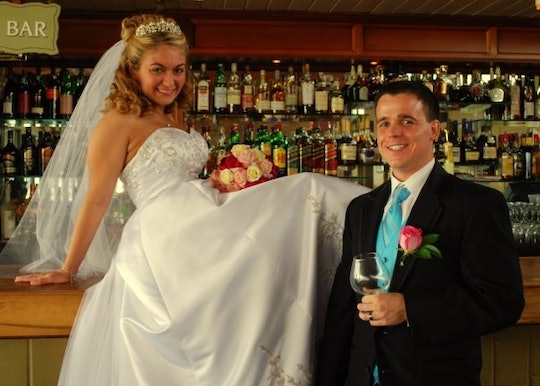 Having a baby changes the relationship between you and your partner, there's just no way around that reality. Some couples find they're more attracted to each other than ever as they watch each other become parents. Others struggle to figure out common parenting strategies and goals and fight over everything from the proper way to swaddle to how warm baby's bath water should be. My husband and I went through months of infertility treatments before I became pregnant with twins, so we were eager and excited to become parents. And because we often joke that we share a brain, I wasn't worried about us running into any fights or disagreements over how we wanted to raise our baby boys. The problem having babies brought to my marriage, however, was one I never saw coming. I wasn't used to having to share my husband's attention and affection, and now I had no choice but to do just that.

More Like This
Here's The Deal With Babies Who Sleep With Their Eyes Half Open
30 Vintage Photos Of Parents Giving Their Babies A Bottle
18 Best Sand Toys In 2021 For Babies, Toddlers, & Kids
You Will Not Regret This Perfect Baby Pool From Target

When our boys were infants, the fact that I didn't get as much face time with my husband as I was used to snuck up on me. He worked traditional hours back then, leaving the house around 8 a.m. and returned home just in time for the boys' nightly 5 p.m. witching hour. On good days he'd play with them while I tried to fix dinner out of whatever canned goods and frozen things we had laying around. On bad days we'd each take a baby and pace around the room trying to rock, sing, or sway — basically trying anything to get them to stop screaming. Neither of these options gave us much time to talk with one another. Then we'd bathe the kids and settle them down for bed, and we'd be so tired that we'd hardly check in with each other before falling asleep, only to be woken up a couple hours later for the first of three night feedings. As much as I loved feeling like he and I were in this parenting thing together, I missed him and the time we used to have to talk, just the two of us.

I didn't notice how much of our time we spent simply being physically close to each other. We used to sit next to each other on the couch, we held hands when we walked. But once the boys arrived our arms were full of babies instead of each other.

In the moments when he'd fall asleep on the couch with both our boys snuggled in his arms, I was torn by my own emotions. On the one hand I was so, so happy that my boys had such a wonderful father who cherished them so much. On the other hand, I was jealous.. After all, that used to be my place to get comfy.

I expected our sex life to go on hiatus after we had kids, but until our boys arrived I didn't notice how much of our time we spent simply being physically close to each other. We used to sit next to each other on the couch, we held hands when we walked. But once the boys arrived our arms were full of babies instead of each other. Now when we go for walks, we can't hold hands because I'm always trying not to die as I shove the double jogging stroller up the hill ahead of me (my arms are stronger than ever, though).

These days, when we try to sit next to each other on the couch, the boys make sure to slide in between us and will throw a fit if we try to suggest that maybe, just this once, mommy and daddy should sit next to each other. While making eyes at my husband from across the couch is kind of hot in a, "I'll deal with you later as long as the kids go down at a reasonable time and we're not too tired and unless we have an episode of John Oliver to watch but I'm pretty sure he was off this week," kind of way, I'd still rather be sitting next to him.

And it's not just the hugs and kisses I miss. I used to be the center of my husband's attention, and I'm not anymore. I have dyslexia, which makes calling the doctor's office to make an appointment not at simple for me as it is for some people. Most times it takes me several tries just to dial the number correctly, and then I often have trouble communicating with the receptionist which dates or times would work for me to come in for an appointment or write my appointment time down wrong. The same thing happens when I call in prescriptions or deal with the bank or anyone at Apple (I haven't been able to log into my Apple account for months because logins and password combos with all those numbers and symbols are the bane of my existence).

It's not just the hugs and kisses I miss.

Before we had kids, my husband took on the responsibility of making these calls for me out of love, and also because I make an excellent sad puppy dog face. After the boys came along, he simply didn't have the time or energy to do it for me anymore. The first time I got a nasty sinus infection after giving birth and he asked me why I had yet to make an appointment with the doctor, I snarled, "Because you haven't called for me." As I said it, I heard how ridiculous I sounded. I was a grown adult, a mother responsible for the lives of others, and there I was claiming I was unable to make my own doctor's appointments. It was really just my way of saying I missed him. I make my own appointments now, but honestly, I wish I didn't have to.

Our boys are older now, but in some ways that means the competition for dad's attention has almost gotten fiercer. You know how when you get news, good or bad, the first person you want to tell is your best friend? For me, that's my husband. Since he works in a job where he can't use his cell phone, I can't text him or call while he's at work all day. That means when he walks in through the door he's ambushed by two 3-and-half year old and a wife who's vying just as hard (if not more) for his attention. He says coming home makes him feel like Justin Timberlake. He's not wrong.

Even after the excitement of his arrival at home dies down, the boys vie for his attention constantly. We both complain that we don't get to talk to each other enough. In fact, we're guilty of sometimes sticking the kids in front of the iPad for episode of Daniel Tiger just so we can have a conversation that doesn't require us to scream in order to hear each other, even though we're not angry. But there are plenty of days when I stomp away like a child muttering "forget it" over my shoulder because trying to tell my husband about the funny thing that happened at work or cool thing I read about online isn't worth it when the boys are drowning out my words with their chatter about trains or crayons or whatever a PAW Patrol is.

I'm not the evil queen from Snow White, no matter what the boys say when I tell them it's time for bed. And I know they're not trying to replace me in their father's affections. I know it's a fantastic thing that they love their dad so much, but I married my husband for a reason — because I love him and love spending time with him. As much as I think he's an amazing dad, and I know he's doing the best he can as a both a father and a husband, I wish I didn't always have to share the spotlight of his attention.

Sometimes, I just want it for myself.