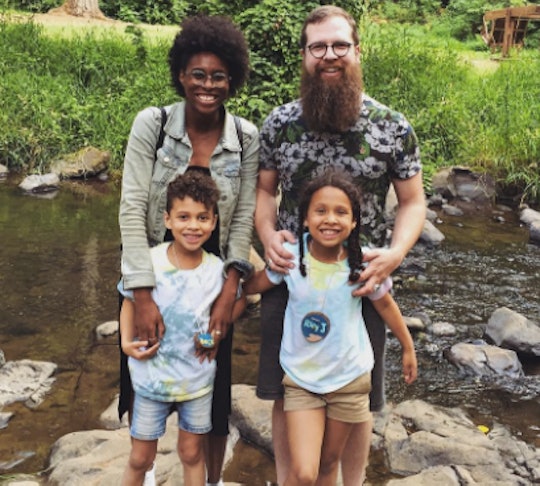 Honestly, We Stopped Having Sex After Kids

I'm just now coming to terms with the fact that I stopped having sex with my ex-husband because of motherhood. We'd always had a healthy sex life, which was a big deal after my experience with sexual assault, but after our children, I can count on just one hand how many times we had sex up until we separated. I don't think I even noticed how much time was going by between our rare sex experiences. Time was really blurred for me, and days ran into each other. When my ex would point out that it had been a few weeks, I'd shrug it off, and tell him he was being dramatic. I'd chalk it up to him "being a man," and that he was just saying this because he thought it was what he was supposed to be say. But it's taken me two years of being out of that relationship to recognize that I avoided sex after I had kids.

More Like This
These 15 Signs Mean You Might Have A Toxic Relationship With Your Mom
The Nonmonogamous Moms Next Door
31 Things Your Postpartum Friend Needs You To Text Them
Yes, You Can Still Get Pregnant — Even If You’re “Leaking” After Sex

When I was pregnant with our first child, my mom gifted me this book on sex after having children. I laughed in her face, saying I'd probably never need that. She gave me a knowing look and said, "You probably will." At the time, I was only about six months pregnant, still having a nice amount of sex, and perfectly happy with what was happening to my body. My pregnancy was going really well. In fact, it was easy. I was obsessed with looking at my pregnant body in the mirror, marveling at what was taking place. I'd go on runs, mostly to get fast food, then run home after. I felt healthy and so in love with my husband. We'd talk about what life was going to be like once the baby arrived, not knowing that it wasn't going to be like we'd planned at all. At one point my ex-husband picked up the book my mom had given us,and told me it wasn't that bad of a read. I huffed back: "We don't need it! Our sex is great! It's always going to be like that!"

Even when I felt better and my morning sickness passed, I wanted nothing to do with sex.

Then the baby arrived. I felt a new level of bliss and happiness I'd never experienced before. I was amazed by this tiny human we'd created and brought into the world. I didn't think there was anything better. But then our daughter hit her first growth spurt, then her second, then had gas. No one told me about these things. They weren't on the baby blogs I'd read, and so I slipped into survival mode. I spent a lot of time feeling like I couldn't handle what was happening and the very last thing on my mind was sex. I assumed we'd circle around to it when we were ready, about five months after my daughter was born. But then I got pregnant again, miscarried that baby, and got pregnant right away after the miscarriage.

Thinking back on it, that was probably the first and last time I had sex with my husband before our son arrived. I laid on the couch for almost eight weeks, throwing up constantly, unable to take care of our 7 month old aside from throwing her crackers and letting her watch as much TV as she wanted. Even when I felt better and my morning sickness passed, I wanted nothing to do with sex.

I recall thinking during this time that once the baby arrived I'd want to have sex with my husband again. But I didn't. After our son was born, I battled with postpartum depression. I didn't want to breastfeed the baby or put him on me. I recoiled at being touched or kissed. I felt like my body was no longer mine, and that it belonged not only to my children, but also as if it belonged to my husband. I was repulsed by this. He never pressured me to have sex, but I could tell he was disappointed.

I felt so out of place in my body. Sometimes I'd look at myself and grab my stomach, examining it. Whose body was this? I'd wonder. What happened to me?

In response, I beat myself up about it. I felt guilty a lot of the time, but I couldn't bring myself to participate in sex with him. Once my son was older, and we had moved to a new state, I was slowly starting to feel like my own person again. I wasn't breastfeeding, my daughter was going to preschool, and I wasn't feeling like I was in demand in the same way that I once was. But even though so much had changed, we still weren't having sex.

It'd been so long since I'd been intimate with someone like that, and now I had no idea what to do with my body.

I never initiated sex, not like I used to. I felt so out of place in my body. Sometimes I'd look at myself and grab my stomach, examining it. Whose body was this? I'd wonder. What happened to me? The last time I really wanted to have sex with my husband, I was younger, and this body didn't exist. It was really hard for me to want to have sex and be completely naked with someone else when my body was something I felt unsure about. For me, sex takes a level of being uninhibited, of feeling free and comfortable, and I felt wholly uncomfortable. It'd been so long since I'd been intimate with someone like that, and now I had no idea what to do with my body.

My ex-husband tried hard to be encouraging, loving, and uplifting about my body and my beauty. But I'd just shout that he was just saying that because he loved me, not because he meant it. I didn't want what I thought was his pity. Now that I'm older, I realize he meant what he said. I just refused to take hear it because I didn't believe them.

I was bitter about my pregnancies, about my miscarriage, about my postpartum depression. I was upset that, for me, the journey back to sex was long and hard and complicated.

Though we're divorced now for a number of reasons, I can remember two of the last times we had sex together. I felt like I'd found myself again after having kids. I'd started initiating sex more often, felt more confident about the body I had, the body that was still very much mine. We both knew the end was coming, and I think we were trying to see if we could still connect in all the ways we once had. We didn't truly connect, but it felt like the Old Us again. In our bed. Being ourselves.

After we finished, I sat thinking about why this couldn't have happened in the beginning, because maybe we would have stayed together. I was envious of my friends who had children and were still having sex with their spouses. For a period of time I was bitter about my pregnancies, about my miscarriage, about my postpartum depression. I was upset that, for me, the journey back to sex was long and hard and complicated. It was so much different than I thought it was going to be. Being with a new partner has made me hesitant about having children because I'm afraid of losing an element of our relationship that I value and love. I know that things are different and I'm proud of myself for making it to where I am, but the fear that we'll lose something that's incredibly important to us both is terrifying.