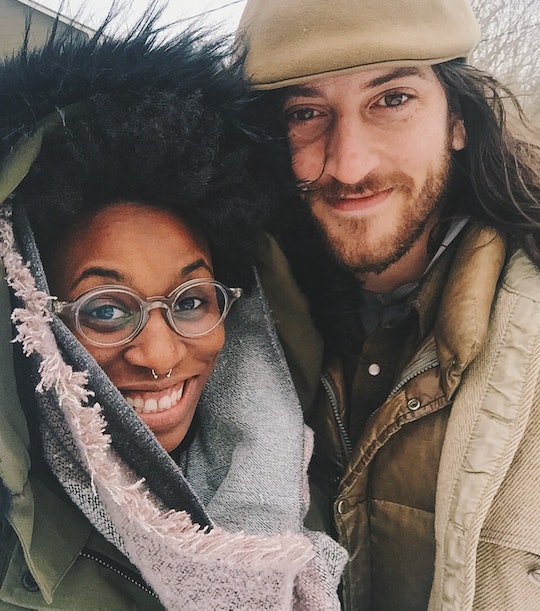 I'm Afraid To Have Another Baby With My New Partner

I've always wanted a large family. It stems from when I was younger, because I always wished for more siblings. I didn't always like having a big brother, but I did really love having someone to play with and hang out with. I also had a little sister who was 20 months younger than me, who I did everything with. We shared a room, friends, and we even did the same after-school activities as one another. It was like having a built-in best friend. Even though I had an older brother, I still always wished that my parents would adopt more children to fit in somewhere between my brother and me. But my parents never did have another baby or adopt, and now, as a parent myself, I completely understand why they didn't. Having more than one kid is challenging enough. When my ex-husband and I first met, we'd imagine our future together. We planned to live in a big house in Oregon, preferably in the country, and raise five children together. And a year after meeting, I was pregnant with our daughter. Then 14 months after she was born, I was pregnant with our son. We decided that two was good enough, and for a few years, I even regretted not having my tubes tied after my cesarean.

Fast forward seven years later and I'm mom to a 6 and 7 year old. These days, my kids are mostly self-sufficient. I say mostly, because every once in awhile my son still needs help wiping, and sometimes its better for me to make them food than it is for me to come downstairs to a kitchen covered in cereal that didn't quite make it into the bowl. My ex-husband and I are divorced, and we're both partnered with other people. Early on in our separation, my ex and I talked about how we didn't want to have children with anyone else. He vowed to get a vasectomy and I promised I'd eventually get my tubes tied. I gave up on my dream of having a large family, at least a large nuclear family. My ex and I had always planned on adopting. I was adopted, as were both of my siblings, and my ex's younger sister had been adopted as well, so it was something that was really important to us. But after we'd divorced, I resigned myself to thinking that if I was ever going to have a large family, it wouldn't be anytime soon. And I also kind of figured I'd be going at it alone.

But over time, as I fell in love, I realized that perhaps maybe I could have more children. Maybe I even wanted more kids.

After my divorce I never really gave much thought to the fact that I'd maybe one day find a person who I'd want to build a life with. I was more focused on figuring out how to not be married, and what it meant for me to be a single person. I did though, of course, unexpectedly meet someone, and two years later, have decided to marry this person. One of our early conversations when we were dating, when we believed we'd never get serious, was about how I didn't want anymore children, but he wanted at least one child. At the time, I thought this was a perfect way to keep us from falling into a long-term relationship: He wanted kids, and I didn't.

But over time, as I fell in love, I realized that perhaps maybe I could have more children. Maybe I even wanted more kids. As our relationship changed and we got more and more serious, I realized that yes, I did want to have more children, and I wanted to have these children with my partner. I've loved watching him interact with my children, and I could see myself having another child with him. So for the past year now, I've been hopeful that I might finally fulfill my dream of a larger family — with him.

Once I realized that kids were something I wanted, I did the math on how many children I wanted in three years. I planned out how we'd have a family bed, because that's what my two kids had been raised with and because that's important to me. I planned out how I'd work around two babies at home, while two kids were in school, and figured out that I could totally handle it. I was really excited and didn't want to wait another year before we started trying to have a baby... until I stumbled upon my old blog entries on the internet.

I want so badly to raise a child with him, but I'm afraid of who I'll turn into if we add another baby to the mix.

I'd written these pieces while I was raising my oldest daughter and when I was pregnant with my son. After I gave birth to him, the blog covered life with two kids, and I was reminded of the time constraints it put on my life. I remembered what nap times were like. I thought about the miscarriage I had in between the births of my two babies. I was reminded that I literally lived in the same clothes everyday, covered in milk and baby food. So many things came back, like how I didn't understand the reason I didn't like my son at first was because of postpartum depression. I didn't understand just how tiring night feedings would be, especially when teething was involved. And I remembered how I stopped having sex with my ex-husband completely.

I can count on one hand how many times I had sex with my husband after my son, and I dread that same fate with my new partner.

So now, when discussing children with my partner, I'm more hesitant. I want so badly to raise a child with him, but I'm afraid of who I'll turn into if we add another baby to the mix. I'm afraid of entering into a depression that's scarier than the ones I endured after the births of my other two children. I spent months after their births completely numb and detached. I loved my children, but I hated being home all day with them. I hated how mundane everything was. How I felt as if we were living the same day over and over, Monday through Friday. Weekends were so special because that meant my husband was finally home, and the days would be less mundane.

I can count on one hand how many times I had sex with my husband after my son, and I dread that same fate with my new partner. My son was 4 when my ex and I separated and for a long time I stopped feeling desirable after I gave birth to my two children. Sometimes I wonder if it was because I had my children so close in age or because I was young and didn't understand. Either way, I worry about falling into that again.

I've worked hard to be the person I am today, not just to myself, but to my children, to my ex, and to my current partner. What if another baby changes all that?

The other day I walked into the library as my partner was working and I said, "What if, we just don't have any kids and we just keep doing what we're doing? It's perfect, why rock the boat?" And he was shocked because just a few weeks earlier I had been whining — literally whining — about how everyone has a baby except me, and that next year was too far off to wait before trying. He asked me why I suddenly had a change of heart, and I told him that "I want to keep us. I'm not sure I'm the kind of person who can be a new parent, and a good partner." I admitted that I didn't like who I became to my ex-husband. I lost myself, which is a crazy thing to think about since I didn't even know who I was at the time. I'm scared to lose who I am to another baby. I've worked hard to be the person I am today, not just to myself, but to my children, to my ex, and to my current partner. What if another baby changes all that?

But maybe that'd be the difference this time around. I'm already aware of who I am, of what I want, of what I need. But it doesn't make the future of raising children with a new person any less scary. And I'm not sure it ever will.