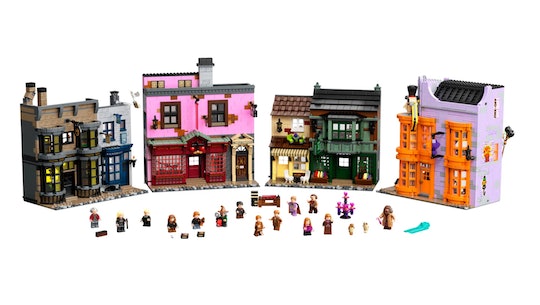 Hold on to your broomsticks, Potterheads. The new Harry Potter Diagon Alley LEGO set lets you explore one of the most magical parts of the wizarding world in more detail than any other LEGO set from the franchise. You can truly have an enchanting time building this mesmerizing 5,544-piece set with your family.

If you've ever dreamed of doing your back-to-school shopping like the wizards do, this is definitely a set worth investing in. In a word, it's epic. When fully built, the entire set spans over a meter wide and features magical details to create an interactive scene that rivals even the fan-favorite Hogwarts Castle set. Now available for purchase online and in LEGO stores, it's sure to be at the top of every fan's Christmas list this year.

The set includes 14 mini-figures that you can use to re-create your favorite Diagon Alley scenes from the books and movies. Avid Harry Potter fans may already have many of the ones included here, but four are exclusive to this specific set. Gilderoy Lockhart, Florean Fortescue, Lucius Malfoy, and the Daily Prophet photographer in LEGO form can't be found anywhere but with this set. (I'm not saying this is all that makes the set worth the $400 price tag, but it definitely helps.)

Personally, my first stop on a jaunt through the cobblestoned streets of Diagon Alley would be Ollivander's Wand Shop. It's literally the place where the magic starts for every young witch and wizard. Of course, I wish there was some way that this set could make the entire store tremble and wand boxes would come tumbling off of the shelves as my wand chooses me, but I'll settle for pushing Mr. Ollivander around on his rolling ladder.

A close second to Ollivander's, my next stop would be to waltz through the lifting hat entrance to peruse Weasely's Wizard Wheezes. I wouldn't be able to help but spend a few Galleons on some Whiz-bangs and Dungbombs to prank my kids with. After some time with Fred and George though, I'll probably need to take a break and grab a sundae at Florean Fortescue's Ice Cream Parlor. (I would say back-to-school shopping calls for a butterbeer from the Leaky Cauldron, but the famed pub is notably missing from this set.)

Looking for magical ink or some new quills? This set includes the Scribbulus Writing Implements storefront where you can find anything and everything needed to keep up with your studies at Hogwarts. At Flourish & Blotts, you can find any book on your back-to-school list. It's also the only place you can drop in on a Gilderoy Lockhart book signing event.

If your new school year calls for new Quidditch robes, Quality Quidditch Supplies is where you'll find them. Maybe pick up a Firebolt while you're there so that you can help your house soar to victory in the Quidditch cup this year.

After your magical shopping trip through the Diagon Alley LEGO set is complete, your wizarding fun doesn't have to end. Online, LEGO's Harry Potter Through The Bricks experience offers instructions on how to build your own QR code out of LEGO bricks. Scan the code to reveal a behind the scenes look of the newest Harry Potter LEGO set. You can also become a LEGO VIP to gain access to exclusive content featuring the brothers who played Fred and George Weasley in the movies and play Harry Potter trivia games.

While this particular LEGO set is intended for ages 16 and up, there is no doubt that once built, you can just give those magical bricks a tap and your entire family can enjoy exploring every inch of incredible detail within Diagon Alley.