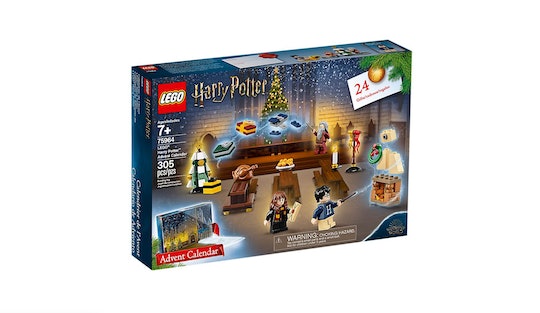 I am a big fan of the Advent calendar, an even bigger fan of LEGO, and a total Harry Potter superfan, so when I heard about the Harry Potter LEGO Advent Calendar, I flipped out. There's something wonderful about having a little something — a small surprise waiting for you everyday — and when you combine that with one of the world's best toys and the magic of Harry Potter? It's almost too good to be true.

Alas, thank Rowling, it is true, and this year the Harry Potter LEGO Advent calendar promises not to disappoint. It's reasonably priced at $40 and contains 305 pieces that will look spectacular with your other Harry Potter LEGO kits. With a gift per day for 24 days, kids and adults alike will be clamoring to open the next door.

LEGO isn't giving everything away (it's meant to be a secret, after all), but from the product shots available, there look to be several new minifigures, trees, house flags, food fit for the season, tables, and even a chess set — I suggest only the best players play, though. No young witches or wizards need die this holiday season. They are promising that the pieces combine to form a scene, and by the looks of it, it will either belong in the Great Hall at Hogwarts or a tavern somewhere in Hogsmeade. Although, if you're feeling like stoking the resistance, I suppose this could all go down with the other members of The Order of the Phoenix.

If I'm being perfectly honest, I have already bought myself one Advent calendar for the year from Costco. But while my "Beers of the World," calendar is arguably going to be incredible, I can't really share that one with my children. This is one that we can do and enjoy together. (After I have them sign a binding contract to not leave a single block where I might happen upon it in bare feet.) They love LEGO almost as much as I do, and they absolutely adore all things Harry Potter.

We're a mixed house household, much like the Tonks-Lupin household. My son and myself belong to the best house — Ravenclaw — while my daughter is a Slytherin, and my husband is a (gah!) Gryffindor. It can make for rather boisterous arguments about the best characters and the like. The Harry Potter LEGO Advent calendar could be a smooth buffer for situations like that. "Yes, yes, I imagine that you do think that running into a burning building with no helmet is a good idea and all, but oh look, here's a LEGO turkey."

You think we don't have conversations like that, but I'll have you know, that is the very thing we were discussing at dinner last night. We can only hope that the egalitarian nature of the holiday, and the excitement of Advent, can keep my children from verbally flaying one another over the seeming inadequacies of each of their houses. I do try to remain neutral as a parent, but obviously Ravenclaw is the best house.

If you're wondering, and if LEGO is reading and perhaps needs ideas for next year's Advent calendar, my Ilvermorny House is the Horned Serpent, and my Patronus is a mastiff. (I really am that much of a dog person.)

Holidays at Hogwarts are done to the nines, and LEGO is doing a pretty great job representing that lively atmosphere with the Harry Potter LEGO Advent calendar. The kit screams "merriment and mischief," which is exactly what it should scream. And like anything Potterworldian, it might scream it loudly, in a room where no one can find it, opened only at the precise right time — like Advent.

More Like This
These 2022 Halloween Squishmallows Are So Cute, It’s Scary
14 Top Gun Costumes For The Whole Family To Buy Or DIY
The Best Halloween Family Pajamas To Match Your Boos
14 Dog Halloween Costumes That Are Perfect For Howl-o-ween