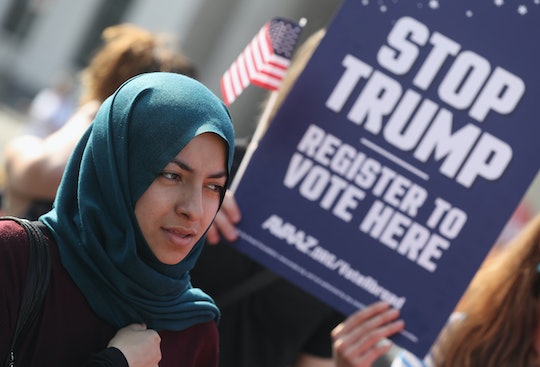 President-elect Donald Trump spent much of his campaign threatening to force Muslims to register with the government, and now the world waits to see whether he'll keep that promise. Critics often compared the policy to the dark days of World War II, and surprisingly, one of Trump's surrogates agrees. During an appearance on The Kelly File on Wednesday night, Carl Higbie, spokesman for the Great America PAC invoked Japanese internment camps while defending the Muslim registry, telling host Megyn Kelly, "To be perfectly honest, it is legal. They say it will hold constitutional muster. I know the ACLU is gonna challenge it, but I think it'll pass ... We did it during World War II with Japanese."

Kelly broke in to clarify: "You're not proposing we go back to the days of internment camps, I hope." Higbie claimed he wasn't, but hedged his bets by insisting that "we need to protect America." Kelly scolded him, "You can't be citing Japanese internment camps as precedent for anything the president-elect is gonna do." Higbie then said that he support registering "people that are not protected under our Constitution," and Kelly had to explain that "you get the protections once you come here." Perhaps Higbie is unfamiliar with the Bill of Rights, which prohibits denying "any person of life, liberty, or property, without due process of law." Any person, Carl. Even immigrants.

The United States interned Japanese-Americans (many of them second- or third-generation) during World War II. When President Franklin D. Roosevelt signed Executive Order 9066 into law, much of the West Coast, where the majority of Japanese-Americans lived, was designated as a "Military Area" which they were barred from entering, thus forcing them into camps for four years. Is this the "great" America that Trump and Higbie long for? A time when "a grave injustice was done to citizens and permanent resident aliens" that was "motivated by racial prejudice, wartime hysteria, and a failure of political leadership"? Those quotes, by the way, aren't from the ACLU, but from the Civil Liberties Act of 1987, which President Ronald Reagan signed into law, authorizing the government to pay reparations to those who were relocated and interned.

Yes, there is a precedent in the U.S. for committing atrocities on the basis of race, gender, religion, and national origin. A long, sordid history that began with Christopher Columbus selling 9-year-old native girls into sex slavery, followed by the kidnapping of Africans to serve as slaves for over 200 years, the Salem Witch Trials, the Trail of Tears, segregation, and so, so much more. It's a time we cannot return to, but the fact that Trump and many of his supporters take it so lightly does not bode well for our future.