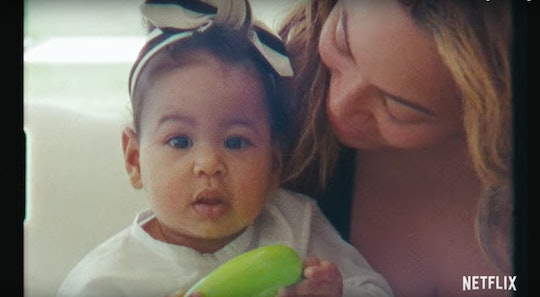 The Trailer For Beyoncé's Netflix Doc Is Here & It's Amazing, So DROP EVERYTHING

Beyhive, prepare to see Beyoncé like never before. On Monday morning, the Homecoming: A Film By Beyonce trailer dropped and it'll absolutely give you chills. It comes amid much speculation from fans following a teaser photo of the title card released on social media just one day prior. And, let me tell you, it looks incredible.

With the trailer, the streaming service confirmed that it will be releasing a documentary about Beyoncé. On Twitter, Netflix provided some information about the upcoming film, billing Homecoming: A Film By Beyonce as an "in-depth look at Beyonce's celebrated 2018 Coachella performance from creative concept to cultural movement."

Clips in the newly released preview show Beyoncé and her dancers preparing for the big performance, which took place in April 2018, according to CNN. The performance came less than a year after she and JAY-Z welcomed their twins, Rumi and Sir Carter, in June 2017, CNN reported.

The trailer also features personal moments between Beyoncé and her children, specifically oldest daughter Blue Ivy Carter. The 7-year-old can be seen dancing, perhaps mimicking the moves her mother and her backup dancers were working on, during what appears to be a rehearsal for Beyoncé's then-upcoming Coachella 2018 performance.

Ahead of the trailer's release, Netflix released a single image on Sunday that featured the word "Homecoming" spelled out in Greek letters on a yellow background. According to Hypebeast, fans were quick to speculate that the project was somehow linked to Beyoncé, though the image suggested nothing of the sort.

The image, however, was indeed reflective of the black and yellow outfits and sorority/fraternity-style tops the Beyoncé and her dancers wore during the previous show, according to Hypebeast, which were a nod to historically black colleges and universities. And after the performance, Beyoncé announced the Homecoming Scholars Awards Program "to coincide with the event," Variety reported.

After the performance, Beyonce and Balmain teamed up to sell copies of the very sweatshirt she wore during the Coachella performance, according to Refinery29, and 100 percent of the proceeds from the sweatshirt sales went to the United Negro College Fund.

Homecoming: A Film By Beyonce is due to be available for streaming on Netflix on Wednesday, April 17, according to Pitchfork. So get ready to gather the Beyhive around the TV and prepare to relive all the magic from Beyoncé's most epic and memorable Coachella performance ever. I know that's what I'll be doing next week.