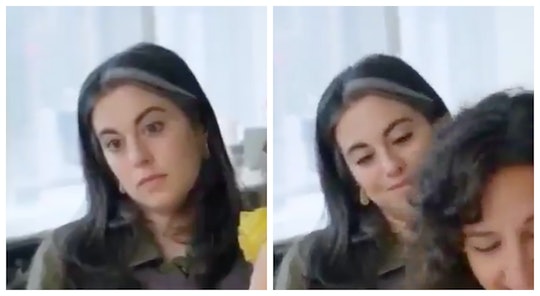 The Hottest New Trend Is Dissociating

Sometimes you find yourself with your hands in a bowl, knobs of butter between your fingers, and no clue what you were doing. So goes a recent video of Bon Appetit pastry chef Claire Saffitz dissociating mid-cooking tutorial, before returning to her body, a moment that was duly memed as ringing in the age of dissociation.

Elsewhere, Emmeline Clein introduced “dissociative feminism" in a Buzzfeed essay titled "The New Trend In Feminism Is Feeling Nothing." "I’ve noticed a lot of brilliant women giving up on shouting and complaining, and instead taking on a darkly comic, deadpan tone when writing about their feminism," wrote Clein of the trend. OK! Except I've been disillusioned by politics since at least 2001, and have been leaving my body to go on little flights of fancy dating back to grade three science class. The past four and a half years of my life as a parent have been solidly devoted to dissociating. If you've ever breastfed, you'll know that it is essentially a license to spend eight hours a day zooming through alternate futures in which you married past crushes, and dipping into phantasmogorias in which you are a guest on The Colbert Report.

Before long, you find you are able to read three children's books back to back without remembering saying a word. Little voices are yammering on about which show they want to watch on Netflix, and you're able to navigate the X-Box controller while simultaneously leaving the room to imagine yourself with brown hair and bangs.

Dissociation was described with horrifying specificity in Kristin Roupenian's sex scene in "Cat Person," as Clein reminds us, but the original form is not floating above the bed, it's finding yourself in Safeway and voluntarily dematerializing to ponder a meeting with Paul Rudd while your body does the shopping. Any time I have to visit a children's museum on a Saturday, I preemptively enter a fugue state. It's the only way! A water-play exhibit? Goodbyeeee!

As many who have taken exception to the jokes on Twitter note, dissociative disorders are very real, meanwhile conscious thought is what sets humans apart from every other species, and so is nothing new (sorry, dissociative feminists!). The Romper editors were just discussing the moment at which our own children realize the gift that is living in the fun house of their own brains. "This morning Barrett was like, 'when I talk in my head nobody can hear me!'" said Jacqueline Burt Corte in Romper Slack. "Like he just now realized this and he seems sorta relieved." Same, Barrett!

We all constantly have our heads in multiple places at once — how else do you explain the phenomenon of finding a full Amazon shopping cart in the morning, but no memory of how all those things got there. How do you explain the entire business strategy of Target?

Britney Spears' entire Instagram account is a monument to the universe of parallel thoughts. Watching her content, I don't know which reality is the real one. Notably, she was a young mom, so she's been developing this superpower for a while, and is as we speak at work on an alter-reality called TheBritneyZone, that we might live in our own dissociative fantasies.

I know that millennials want to have this new thing, but hands off, kids, us parents have been doing this for years. Chances are, for those of us holding a baby, we're doing it right