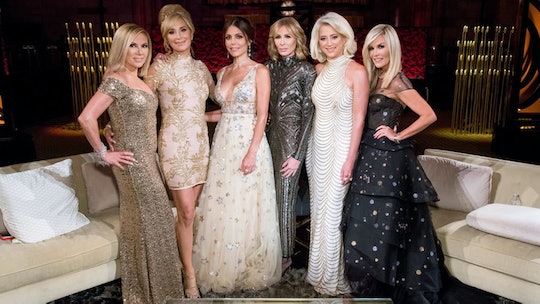 With 11 seasons and counting, the women on Bravo's The Real Housewives of New York City are used to putting their lives on display for the world to see, no matter how delicate the subject. In Aug. 2018, Bethenny Frankel's on-and-off boyfriend, Dennis Shields died. Since RHONY was filming, the Bravo team caught a few of the Housewives' reactions to Dennis Shields' death on film. And the reactions are nothing short of heartbreaking.

The Housewives star and Dennis dated in 2016 following Bethenny's divorce from Jason Hoppy. Fans of RHONY might remember their relationship, as it was documented on the Bravo series early on. And while the couple eventually split, Bethenny and Dennis stayed close friends.

“They had a 27-year friendship before they dated so they picked that up where they left off once they realized they didn’t work as a couple,” a source previously told People.

According to Us Weekly, the New York banker died in his Trump Tower apartment from a suspected overdose. Dennis was 51 at the time. Three days after his death, Bethenny shared a photo of Shields beside her dog, Cookie, who died a year earlier. She captioned the photo, "Rest In Peace my sweet babies who gave me endless unconditional love. #nowandforever."

“This is heartbreaking,” Sonja Morgan told Radar Online. “I spoke to Bethenny yesterday to say I was going to Coast Rica, in case she wanted to come and get away. She’s been working so much.”

Meanwhile, Carole Radziwill went to Twitter. "I just heard the sad news about Dennis," the Bravo star wrote. "He was a good man. My condolences to all his family and friends. So tragic."

When speaking to Entertainment Tonight about Season 11 of RHONY, Luann de Lesseps also that this would be a difficult season for both of them. But, the women would see them support one another.

“I'm there for Bethenny, and she's been there for me in a big way,” Luann said. “When you have traumatic things like that happen in your life, girlfriends support you and that's what you're gonna see. You're gonna see support… and then you're gonna see whatever is going to unfold as usual on the Housewives.”

It wasn't until the start of RHONY Season 11 that fans got a glimpse of how Bethenny was doing after Dennis' death onscreen. In the premiere, Bethenny shared how she learned about Dennis' passing.

"Tyler, his daughter, called me hysterically crying, and she said, 'My dad died this morning,'" she said. "And I started screaming into the phone."

Bethenny also shared how she felt the moment she found out, even recounting the whirlwind of thoughts that went through her head.

"I've never in my life experienced this moment, this feeling, this hysteria," she said, per Bravo. "Let's figure out what happened. Let me put the pieces of the puzzle together. Someone tell me how bad they feel, his daughter, his son, he was doing this last week. He wrote me 50 texts, he wanted to marry me, I have a ring on my finger. He's dead. It doesn't matter. He's gone. There's nothing to say."

However, not all of the Housewives castmates had great initial reactions to Dennis' death. In the Mar. 20 episode of RHONY, Ramona Singer made a comment criticizing Dennis' intelligence due to drugs. She quickly went on record on Watch What Happens Live with Andy Cohen to explain that she didn't recall saying what she said on the show and texted Bethenny and cleared the air.

The RHONY star also apologized before the episode aired on Bravo. "I cringed when I saw what I said about Dennis in tonight’s episode," Ramona wrote on her Twitter. "It definitely wasn’t one of my finer moments. I respected and liked him very much and I sincerely apologize to his family and Bethenny for my thoughtless comments."

Regardless of what was said in the past, fans will be happy to hear that the RHONY cast has come together to support Bethenny during this difficult time. And moving forward, fans will see Bethenny continue to deal with Dennis' passing in upcoming episodes of Season 11.

The Real Housewives of New York airs Tuesdays on Bravo.