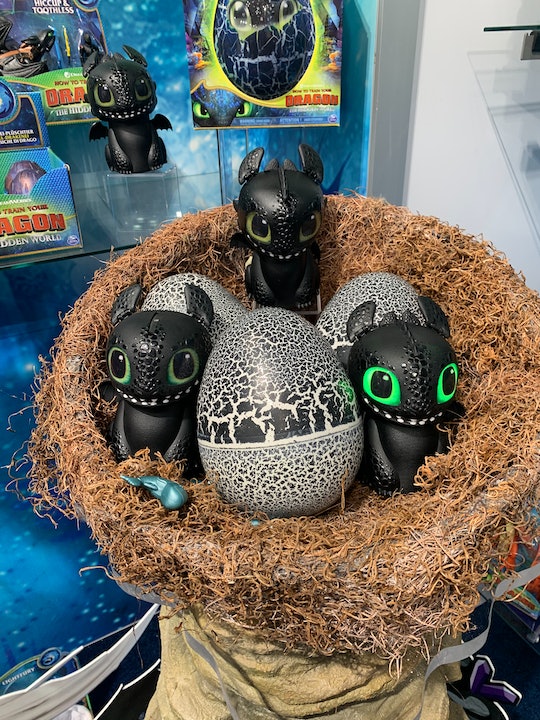 OMG, You Can Now Hatch Toothless From An Egg & Live Out 'How To Train Your Dragon'

There are few things more thrilling as a child than having your own little creature to take care of — and I don't just mean actual living pets. It's why Furbies were so popular, why Tamagotchis adorned every '90s kid's belt loop, why Hatchimals flew off the shelves a few Christmases ago. And when that little creature is a well known character? Oh boy. Now you've done it. Which is exactly why literally everyone (including me, OMG it's so cute!) will want Spin Master's newest toy — a hatching Toothless from How to Train Your Dragon.

I KNOW. Are you as excited about this as your kids will be? It's a close call. Spin Master revealed the new toy at the 2019 Toy Fair, and the Romper team was incredibly excited to see the little guy in action. With the same technology used for the famous Hatchimals, this egg features a little Toothless inside that makes sounds, moves, and has eyes that light up from inside the egg so you know he's really there. If you tap on the egg — which looks insanely cool — Toothless will tap back from inside. But if you're ready for him to come out and play, shake the egg around until Toothless gets irritated enough with you to hatch his way out. I mean, same, Toothless. Same.

The fun doesn't stop once Toothless is out of the egg either. You can play games with him like Ask Toothless, Hot Potato, and Toothless Says, but you can also teach Toothless to "fly" and fulfill your dragon training dreams. As you hold Toothless through the air to soar, he will make roaring sounds as his ears, wings, and head move. You guys. Forget my 4-year-old — I want a hatching Toothless! Toothless also loves affection, so he'll purr if you rub him on the head, and with his fish accessory, you can feed him the perfect snack after a day of training.

Sigh. These toys make me so happy. As a kid who was obsessed with baby dolls and taking care of little things — whether it was a stuffed animal or an egg I hid in my drawer under a lamp hoping it would hatch into a chick (spoiler alert: it didn't) — having my own little egg to hatch into Toothless for me to take care of would've been a literal dream come true. Your kid doesn't have to be a huge How to Train Your Dragon fan either (although that certainly helps). The magic of these toys is that your kid is the sole caretaker of their own little dragon. It just doesn't get much better than that.

You can expect to see the hatching Toothless on shelves in fall 2019, just in time for holiday shopping, and they'll be available at major retailers for $59.99. Like the Hatchimals before, this one's most likely going to be a huge hit, so be prepared to pick one up as soon as they hit shelves. TBH, I'm already thinking about the best course of action to get me one — and then maybe one for my kid.