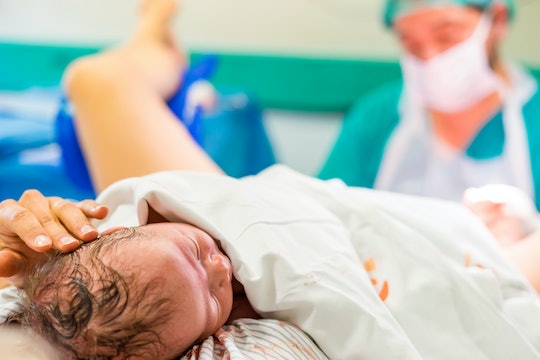 Some Hate The Husband Stitch, Some Ask For It

It was in the hospital room just after Crystal Henry delivered her first child that her life began to resemble a Margaret Atwood book. Her doctor winked at her husband and then stitched her, adding an extra stitch so she’d be nice and tight for him. No joke, no urban legend. This extra little stitch, commonly referred to as the “husband stitch,” “husband’s knot,” “vaginal tuck” or the “daddy stitch,” has no use other than to tighten up the area for intercourse. And it happens frequently without a woman’s knowledge. Today.

To add insult to injury (literally), the husband stitch made sex unbearable for Henry, a San Antonio-based writer.

“It literally felt like my husband rolled his junk in tar and followed up with a dip in a bucket of broken glass,” Henry says. “It felt like I was being ripped in half, and the pain didn’t let up until I had my second child and ripped that stitch open.”

Technically, a husband stitch is when the levator ani muscles are pulled together with a stitch, and the doctor makes sure the vagina is well-supported with muscle rather than being loose and relaxed, says Daniel Roshan, M.D., a high-risk maternal-fetal OB-GYN and director of Rosh Maternal-Fetal Medicine.

Many doctors still do this, but typically don’t mention it to anyone as this is almost part of the routine repair, Roshan says.

“Of course, attention should be made that the vagina does not become too tight or too loose, and be back to normal as either one could cause dissatisfaction,” Roshan says.

The answer, it appears, is sewn directly into their bodies.

There’s no clear data on how many women receive "daddy stitches" post birth, as these aren’t reported to insurance, nor are they spoken about in medical terms, says Dr. Nikola Djordjevic, a family physician and co-founder of the online site MedAlertHelp.

In fact, there’s just one research paper that touches upon it on PubMed and ScienceDirect, which looks into Brazil’s high episiotomy rate, mentioning the “ponto do marido,” which is supposed to make the vaginal opening tighter post-delivery than pre-delivery.

The husband stitch tale is simply whispered amongst women post-birth who are uncomfortable having sex and don’t quite know why. The answer, it appears, is sewn directly into their bodies.

These extra stitches were more common in the past when episiotomies were routine — but regardless of the reasoning behind it — and are often painful for the woman.

“Women with a husband stitch often report about painful intercourse, or describe their vagina as a skirt with a pleat in it,” Djordjevic says.

After having the stitch, Henry attempted to grin and bare it, but after months of painful sex, she finally returned to the doctor who had administered the extra loop.

“My doctor insisted that it would get better the more we had sex,” she says. “I literally stopped enjoying sex for at least three years, but I faked it because I didn’t want my husband to be bummed.”

The husband stitch led to marriage counseling for Henry and her husband, where they spoke about how he was upset that she faked it, even though she did it with good intentions.

Some women, however, don’t mind — and even request the extra stitch for themselves.

[She] describes the stitch as symbolic of the 'the persistent misogyny inherent in medical care.'

Melissa Song, a Chicago-based single mother of a 14-year-old, says she didn’t need stitches after birth, but she says that if she had been “looser,” she would have wanted it.

Others say that pelvic floor therapy will fix any issues sans an extra stitch.

Allison Leonard, a cosmetologist who lives just outside Chicago with her 17-month-baby, describes the stitch as symbolic of the “the persistent misogyny inherent in medical care.”

And, she says, “If they want to give you a tighter vagina, they need to start recommending pelvic floor therapy after delivery.”

Or, the doctors should ask your consent before altering your body without medical reason, says Thompson, who recommends speaking with your doctor before the birth to make your concerns clean.

“Patients frequently voice their opinion on what they like and how they like it, so it’s good to let your doctor know your preferences before delivery,” she says.

After a vaginal delivery and repair, it usually takes a couple of months to feel back to normal again — even without the extra stitch, Thompson says.

“But if the repair is too tight, intercourse could become very painful, and it may require treatment,” she says.

Partners may also require treatment, jokes Andrea Cordts Pastin, whose children are 2 and 5 and says she has her own definition of the husband stitch: “The stitches he needs when he gets a brick thrown at him for making a comment that my post-birthing vag isn’t good enough anymore.”