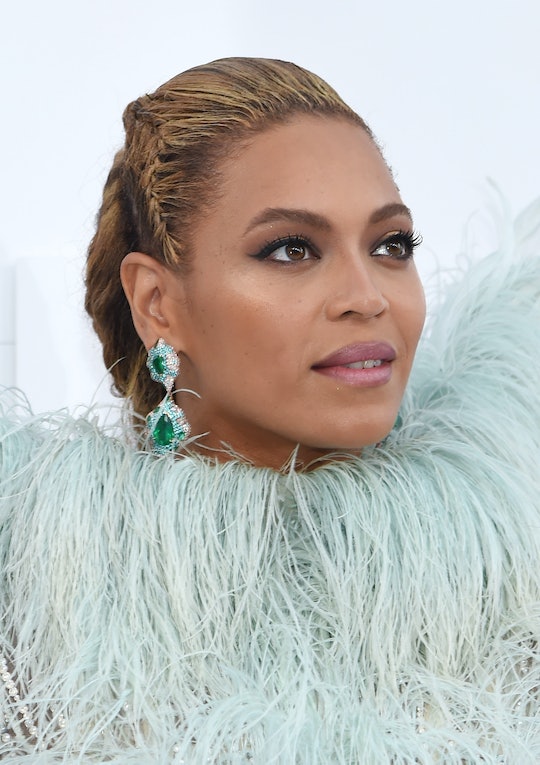 Beyoncé has managed to slay the internet in the last 24 hours by breaking a Guinness World Record for the most number of Instagram likes with her amazing pregnancy announcement on Instagram Wednesday. Since the news exploded across social media, Beyoncé's official website has been updated into its own work of art, featuring photos and an evocative new poem by Somali poet Warsan Shires. The poem, "I have three hearts," on Beyoncé's website is at once powerful yet vulnerable, interspersed with visually striking photos of a pregnant Beyoncé.

"I'm watching life inside me grow," the poem begins. "There's life growing inside of me and I'm beside myself with dreams." If the trance-like poem sounds familiar, you're probably being reminded of the hypnotic poetry featured in Beyoncé's film, Lemonade. Warsan Shires also wrote the poetry in the Lemonade visual album, and has again lended her transcendent poetic talents to Queen Bey as the 35-year-old music artist celebrates her pregnancy in such a public way. Shires is a 28-year-old Somali poet from Kenya who lives in Los Angeles, California. Shires was awarded the African Poetry Prize by Brunel University in 2013, and in 2014 was selected as the poet in residence for Queenland, Australia's Aboriginal Centre for Performing Arts.

"I have three hearts" can be interpreted in a number of ways: In a very literally sense to her own heart and the hearts of her twins in utero, to a broader sense of the three hearts of her family: Herself, her husband, and her daughter. It's a powerful image no matter the interpretation, and speaks to the deep level of self-reflection that courses through the poem.

Just as Beyoncé's maternity photos evoke imagery of Mother Goddesses, so too does Shire's "I have three hearts" poem at Beyoncé's website. She writes of fertility goddesses such as Venus, Nefertiti, and Osun while also questioning the earthly nature of being pregnant and the legacy of motherhood in her own family. "I look at photographs of my mother when she was pregnant with me," the poem reads. "Does she feel how I feel now?" Above and below the lines of poetry are old family photos of Beyoncé's mother, Tina Knowles.

The full text of the Warsan Shire's "I have three hearts" poem is below — but head to Beyoncé's official website to see it in the gorgeous artistic context of Beyoncé's maternity photos shot by conceptual artist Awol Erizku.

i have three hearts (Warsan Shire)

i'm watching life inside me grow;

there's life growing inside of me

and i'm beside myself with dreams.

was it your voice i heard? you speak to me

i have three hearts.

mother is a cocoon where

swells and stretches to protect her

child, mother has one foot in this world

one foot in the next,

in the dream i am crowning

pray around my bed,

i can smell jasmine,

i wake up as someone

love touches her, this

is how she is reborn

i look at photographs of my mother

when she was pregnant with me,

does she feel how i feel now?

venus has flooded me,

second planet from the sun,

i wake up on her foamy shore.

she wants to take me to meet my children.

Absolute perfection — would we have expected anything less regal from Queen Bey? I think not. Congrats again, Beyoncé: The world is celebrating your joy with you, too.