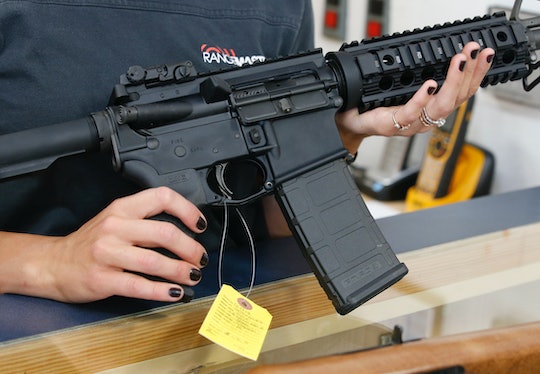 Parents want so many things for their kids. They want them to be happy, to sleep well, to eat leafy vegetables, and play in the sunshine. But the number one thing most parents want for their children? They want them to be safe. Which is what made this viral image of a little girl standing on a toilet so terribly poignant and why it's such a powerful commentary on the sad state of our culture in the 21st century.

Stacey Feeley, a mom from Michigan, snapped an adorable picture of her daughter standing on the toilet. Because that kind of thing is supposed to be funny, right? When your kid is being a little goofy, standing on toilets and such. These are the small moments in a parent's day that make parenting fun. But when Feeley asked her daughter what she was doing, her 3-year-old little girl's answer reduced her to tears. It turns out her little girl was practicing what it would be like to hide from an attacker, something she had learned in a lockdown drill for her school. Feeley, devastated and enraged, posted the picture to Facebook with this caption:

Politicians - take a look. This is your child, your children, your grandchildren, your great grand children and future generations to come. They will live their lives and grow up in this world based on your decisions. They are barely 3 and they will hide in bathroom stalls standing on top of toilet seats. I do not know what will be harder for them? Trying to remain quiet for an extended amount of time or trying to keep their balance without letting a foot slip below the stall door?

Feeley's image hit Facebook within days of the attack at Pulse nightclub in Orlando, where 49 people killed and 53 others injured in the worst mass shooting in American history. Feeley's post went viral soon after it was shared, with over 31,000 shares and thousands of comments. Many people were horrified and saddened by this picture of a little girl "play" hiding from a potential killer, making sure her feet weren't seen.

"I truly am sorry that kids and teachers in the US feel compelled to be ready to react to a Columbine- like situation. It really makes me wonder about the values of citizens weighting more an Amendment to the Constitution than thousands of deaths per year," one commenter wrote. Others felt that gun safety measures wouldn't stop anything. One commenter wrote, "If you get stabbed by a fork, you don't blame the fork. You blame the person."

So, essentially Facebook reactions could be used as a fairly accurate litmus test for politicians. A split Senate voted down possible gun safety measures on Monday, even after a 15-hour filibuster by Democrats desperately trying to urge the Senate to act in the wake of the Orlando shootings. Not even a National Instant Criminal Background Check, put forth by Iowa Sen. Chuck Grassley, a Republican, was passed.

Because these are the times we live in. Innocent people are killed, and little children have to learn how to crouch and hide in fear while politicians do nothing.