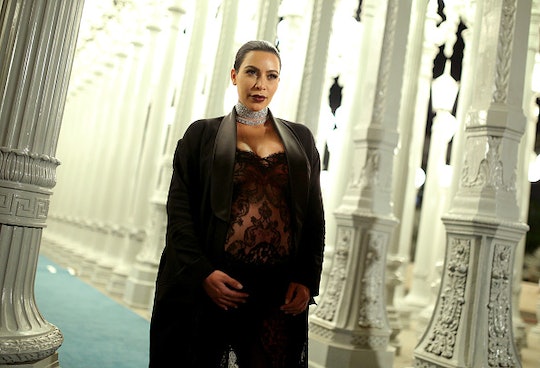 The Internet Heard About Saint West, & The Response Is Glorious

He has a name! Two days following the birth of her second child, Kim Kardashian shared her son's name, Saint West, with the world. And, as one does in the digital age, people are responding to Saint West's name, as well as the way his mother shared the news. In true Kardashian fashion, the reality start posted the baby's name, along with his height and weight, to her website and Twitter account alongside an emoji-version of the Kardashian-West family.

Kardashian's pregnancy was a major topic of conversation over the last nine months, particularly as she detailed the numerous challenges that came with it. Entertainment Weekly shares that the pregnancy got easier for Kardashian toward the end:

Saint ... was in breech towards the end of November, which would have resulted in Kardashian undergoing a C-section, but the reality star’s doctors were able to re-orient the baby to the correct position for a traditional birth before December. Saint was safely delivered without complications.

Now the newest addition to the Kardashian-West family is here, and fans could not be more excited. As soon as the name was announced earlier today, the Internet jumped in with its opinions, making Saint West the number one trending topic on Twitter.

Kim Kardashian started it off with a meme of her own...

...and the internet answered. Some tweeters shared their enthusiasm for the name choice, including feminist icon Roxane Gay.

Others weren't feeling it:

Others are on the fence.

But plenty of people have already accepted that Saint West is destined for world domination.

Oh Internet. You never cease to amaze the world.