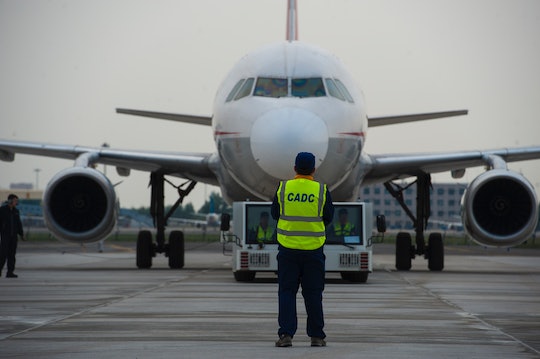 Any time I took my four little boys on an airplane, the look of horror on the faces of the other passengers always took me by surprise. Especially when my youngest were two and three years old respectively. I mean, I sort of get it. Sitting on a plane for hours isn't super fun and when you add kids into the mix... yeah, it can be rough. Fortunately for me my sons sort of loved flying so nothing much ever happened. Certainly nothing that got people upset like this case... a woman reportedly let her kid use a potty in a plane aisle, and the internet definitely has some feelings about it. Probably much like the other passengers on the plane.

The Instagram account Passenger Shaming shared a strange incident that was apparently caught on a recent flight. In the picture (where the small child's face has been blurred out because no matter what it's never okay to shame a kid) a woman can be seen crouching down beside her child as the little girl uses a potty. In the middle of the airplane aisle. Where other people are sitting just a few feet away. And no, I'm not making this up.

As the popular Instagram page wrote in the caption that the lavatory was reportedly unoccupied but the woman wasn't budging, even when the flight crew came along to speak to her:

PRO TRAVEL PARENTING TIP: Use the lavatory for your child. **BACKSTORY: Parent brings own potty seat on board, sets it in aisle midflight to have child use (in front of everyone)- when discovered by crew was advised she couldn’t do this & would need to utilize the unoccupied lavatory...and her reply...“I don’t give a shit!”

So obviously, people have some feelings about this. There were plenty of people who felt this was incredibly inappropriate and inconsiderate behavior on the part of the woman who was caring for the child on the flight.

Just don't understand people....like what part of that seemed ok? Made for an entertaining post though….

A few people called the action "disgusting" and "unsanitary," with more than one person wondering:

How did she pack that??

Another Instagram user noted that the potty would have to be cleaned after use, and wondered if this woman planned on washing it in the lavatory "where other passengers wash their hands."

There might have been a whole lot of people who were not okay with this behavior but this mom did have some back-up.

Are you all out of your minds? This is a little kid they probably needed to pee … that [kids pee is] probably the cleanest thing on that airplane … You go mom!!!

Hats up for every mother doesn’t give a s*** about rules labeling and everything else when it comes for the health or the comfort of their kids!

I like to consider myself a mom who supports other moms. Someone who encourages parents to go easy on themselves, to give themselves a break, to ignore societal expectations.

But I think I might have to say... not a fan of this one. Sorry.