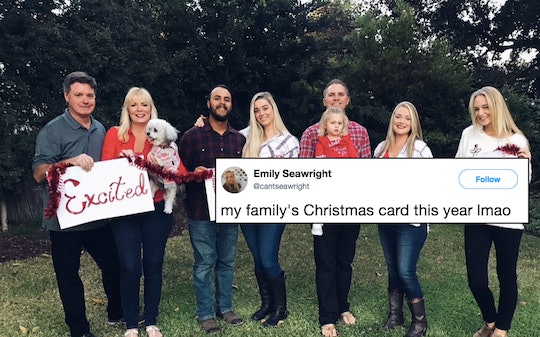 Everyone Can Go Home Now, Because This Family's Hilarious Holiday Card Just Won 2017

The holidays are fast approaching, and with them come the questions from family, digging for updates about the sort of year you've been having. What have you been doing? What's new? Any developments? Anything exciting? Which is always great if you, say, cured cancer or wrote a Pulitzer Prize-winning article or something. But if, like me, the biggest thing to happen for you this year is that you finally figured out where to get the perfect burrito, it can get dicey. We've all been there, I think. Which is why the internet is obsessed with this family's viral holiday card. We've all been the "Emily," and there ain't nothing wrong with that.

Emily Seawright's family seems to have had one heck of a year in 2017. According to the family's holiday card, one couple is expecting, another pair is engaged, and the parents are justifiably excited. Which is good, because I think their alliteration goals were important to them. As for Emily Seawright... what does she have to announce for the end of 2017? Apparently she's just "Emily," which fits in with the alliteration game. Which is just excellent, if you ask me. Emily's big news seems to be that she is still named Emily, and she happily shared that news (along with the rest of her family's news) on Twitter with the caption:

Now if Emily was worried she might be the only "Emily" out there, she was wrong. Her tweet has been liked more than 300,000 times in just three days, and has been retweeted over 49,000 times. It seems the internet, indeed the world, is full of "Emilys;" regular people with nothing to announce at the holidays other than the fact that they're still kicking it, still surviving, and still smiling.

One Twitter user even went so far as to claim that "we are all Emily" and called for "Emilys to unite."

So how would Emilys unite, exactly? Well, by being loud and proud about the "Emily-ness" (not a real word) or your situation. When someone asks you if you're engaged or expecting, don't shrink away from answering them. Don't be ashamed... embrace your inner Emily! If a family member asks about your career and you're just not in that head space, don't sweat it. Just be Emily.

Or, in this guy's case, you can just be egg salad.

There's a reason people are embracing the Emily of the holidays (although you shouldn't really actually embrace a real Emily without her express permission). I think people are finally realizing it's OK to be just chilling from one year to the next.

There might even be an upside to announcing your inner Emily; you'll be able to figure out which of your family members are social media savvy or just sort of out of the loop.

Here's the thing about the family holidays; I actually, sincerely believe that all of those people asking you *those* obnoxious, invasive, frankly rude questions are utterly unaware that they're not being cool. They might be genuinely interested in you and your year, according to Psychology Today. They might want to know what you've been up to and don't know how to ask without those Pavlovian responses that are so ingrained in us over the years. Those questions that are so obvious they tend to get pretty boring:

Who are you dating?

When are you having kids?

Or maybe, just maybe... these people aren't willing to accept their own inner Emily just yet. They're trying to deflect, to avoid answering the same questions themselves. It's just a guess, but I bet it's probably true.

So this year, just be Emily. All of you. It will make it all so much easier.