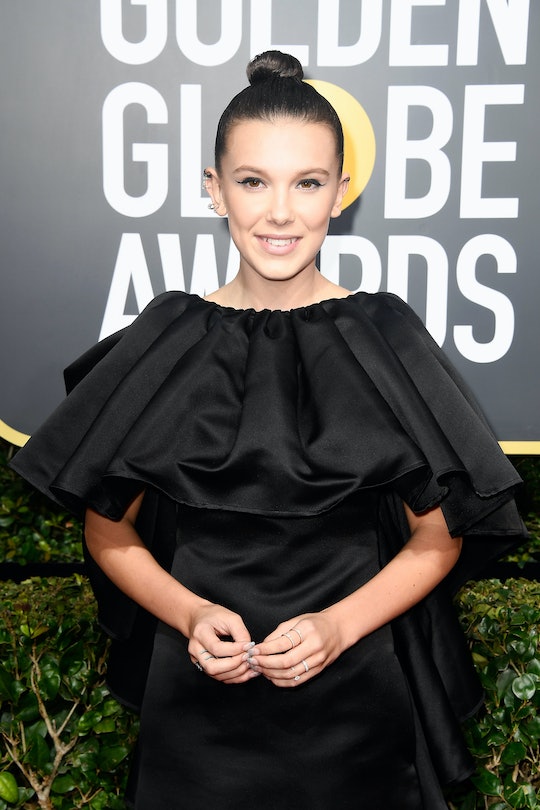 Here is the first thing I noticed on the red carpet of the 75th Golden Globes on Sunday night about Stranger Things' Millie Bobby Brown; she looks adorable. The 13-year-old actress appeared to be happy and confident, but that's not what many people saw. The internet is pissed about Millie Bobby Brown's Golden Globes look, and it's actually a little ridiculous.

On one hand, I totally agree with some of the main concerns out there on the internet; the young actress looks older than her years. And I'm not going to pretend that this tendency that continuously seems to crop up with young actresses in Hollywood to expedite their aging (a la the Olsen twins, Natalie Portman, etc.) isn't a serious concern. As former child actress Mara Wilson recently pointed out in a brilliant op-ed piece in Elle Magazine, a 13-year-old girl cannot be called "grown up," no matter how you slice it. So I do get it.

But sometimes, let's give a girl a chance to enjoy wearing whatever she wants. Millie Bobby Brown deserves to get dressed up and totally own a red carpet event no matter what her age might be. I mean, can you imagine being 13 years old and having the opportunity to rock the red carpet like a queen? It's the stuff of dreams. And there were actually some people on Twitter more than happy to acknowledge that fact.

Despite the fact that some people were happy enough to see the young actress confidently strutting her stuff on the red carpet, there were plenty of people who were pissed.

There are obviously two sides to this sensitive little coin here. First of all, yes, Brown should be allowed to happily wear whatever she wants to the award show. This feels like an especially prescient concept this year, with so many women finally standing together in unity to speak out against inequality, particularly in Hollywood. The women of Hollywood showed up (nearly) en masse dressed in black as a way to protest the years of systemic sexual harassment and sexism they've faced in their industry. Millie Bobby Brown was one such young woman dressed in black. And isn't her right to choose her own dress exactly the sort of thing women are meant to be fighting for right now?

But then there's the flip side to that complicated coin. The concern that a 13-year-old girl could be condemned for her outfits, or seen as an acceptable sex symbol based on her choices, is far too real. That somehow her choice of outfit might invite comment and, worst of all, continued judgment from people in the dark caverns of the internet. As Wilson, who starred as a young girl in movies like Mrs. Doubtfire, wrote in Elle:

"The implication was that if a young girl in the public eye showed anything that could even possibly be construed as an expression of her sexuality, she would be an acceptable target for scorn or harassment. It was especially upsetting to see other women tweeting this kind of thing: Every woman has experienced that same harassment or scorn in her life, and they should know it never feels good."

At the end of the day, Millie Bobby Brown is allowed to enjoy every moment of her newfound (and well-earned) fame however she sees fit. She gets to wear whatever clothes she likes, makeup and heels included if that's her particular scene.

Because it's 2018, and judging women of any age based on her outfit choice is just really old-fashioned. It's not supposed to happen anymore.

So leave the kid alone and let her have a little fun, guys.