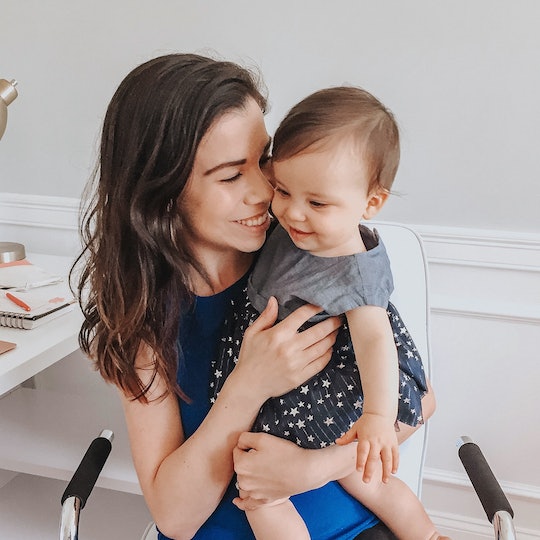 The Intrusive Questions Don't Stop After You Give Birth

When I was pregnant, I felt like I couldn’t go anywhere without someone commenting on my belly, asking a personal question, or generally turning my body into a conversation piece. (I can recall one particularly frustrating encounter during my third trimester when my husband and I were out to dinner, only to have our conversation interrupted several times by the couple next to us who asked no less than 10 questions surrounding my pregnancy and impending birth.) I looked forward to the end of my pregnancy as also the end to the constant stream of chatter with strangers. It turns out that it was only the beginning, as the personal questions don’t end after your baby is born — in fact, they get worse.

It took me a while to work up the courage to take my daughter out by myself. As a first-time mom, even the idea of a coffee run seemed overwhelming for weeks. (Plus, she was born right at the beginning of flu season and I was terrified of her getting sick.) Our first outing didn’t occur until she was 3 months old, and I nervously loaded her infant carrier into the Target cart while mentally repeating to myself the things that we needed.

It’s straight-up draining to have to have a dozen or more redundant conversations with random people every time I leave the house.

As we navigated the store, nearly every person we passed peered into the cart to look down at her. Some would comment that she was cute, others would stop and ask me how old she was, or inquire about her name. I responded to every compliment and inquiry with a smile, but by the time I got to the checkout line, I was exhausted. My mouth was dry from speaking the entire time in the store, and my face hurt from smiling back at so many random people.

That experience, I found, was not unique. And it’s only intensified as my baby has gotten older. At 10 months now, she’s interested in everything around her, including other people. And while I love and appreciate how social she is, it only makes the problem worse, because she engages with everyone who crosses our path.

The other day at the grocery store, I decided to count how many people talked to us while we were shopping; I lost track at 15. Like that first time at Target, some people just seemed content to smile and make a noise back at my baby. But many of them quickly turned their attention to me, offering an observation about my baby’s appearance (“Her ponytail is precious!”) or asking a question (“What’s her name?”)

The questions are the most annoying, because they don’t always stop at the basics. I’ve had strangers ask me if I have other kids at home, what I do for work, what my due date was, if she was early or late. They’ll ask if she has teeth, if she’s crawling or standing, if she’s talking, if she’s sleeping through the night. And this doesn’t happen just once in a while — it’s literally, without exaggeration, every time we go out.

Truthfully, it’s straight-up draining to have to have a dozen or more redundant conversations with random people every time I leave the house. In all other aspects of my life, I’m a fairly introverted person, and the pressure to be “on” in front of strangers isn’t just tiring, it’s also really stressful. Sometimes I just want to dart into the grocery store, grab the five things I need, and go home. Other times I want to shop leisurely in peace, or just enjoy the day with my daughter without stopping to talk to every single person we pass. It doesn’t seem like an outlandish request.

What’s most infuriating is the way people seem to feel entitled to these interactions, the same way they appeared entitled to facts about my pregnancy during my third trimester. It’s as if a baby (or a person’s baby bump) equals a free pass to conversation — a conversation that is often personal, intrusive, and uncomfortable. There’s a strange obsession with pregnancy and babies within our culture that empowers people to behave this way, and it has consequences. These interactions can end up taking away the agency of the mother or pregnant woman, making her feel like her personhood doesn’t matter. My body felt like a conversation piece, and now my baby feels like one.

The common counter-argument I’ve heard is that people are “just trying to be nice.” It’s the same argument I’ve heard about comments during pregnancy. “People love babies! People are just curious! People are just being polite!” But here’s the thing: Intent and impact are not the same. Just because someone has positive intentions does not mean that it doesn’t affect me negatively, nor does it invalidate my reaction. My feelings matter, my response matters, I matter.

People need to understand that existing in a public space is not the equivalent of being a public space. Women, regardless of age or motherhood status, are not commodities. Nothing about us should be seen as an invitation for conversation — the way we dress, if we’re pregnant, if we’re carrying a baby in our arms. I know I would be much happier if random people didn’t talk to me at all, and I bet I’m not the only one.