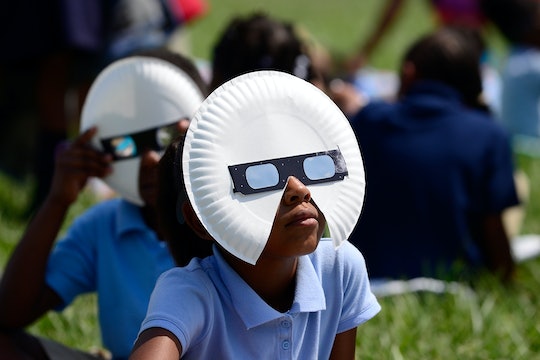 Unless You're Going On Vacation, You're Probs Gonna Miss The Solar Eclipse

In 2017, the people of America did the unthinkable and took a collective break from their busy lives in the name of science. Sporting futuristic glasses and turning their eyes towards the sky, it looked for a minute as though the entire country was about to watch some colossal 3-D screening. What the sky-gazers were actually about to witness, however, was perhaps even more extravagant: the first total solar eclipse in years. Feel like you missed out? Don't worry, the next total solar eclipse is right on the horizon.

On July 2, a total solar eclipse is expected to occur over South America and the South Pacific, including parts of Chile, Argentina, Ecuador, and Brazil. Since this special event will be happening almost directly over the Pacific, the best places to view the sky will likely be from a boat or plane at around 12:55 p.m. EDT, according to space.com’s Eclipse Guide.

If you’re not planning on taking a flight anytime soon though, don’t be discouraged. Eclipses don’t travel alone, assures Time and Date, which means you still have time to book a trip down to South America to see a partial lunar eclipse on July 16 around the same area. As far as eclipses visible from the United States, you will be able to see a Mercury transit on November 11, which is essentially a mini version of the real deal. Otherwise, you'll have to wait until 2024 to see the next total solar eclipse in North America.

As exciting as the eclipse might seem, the total obstruction of the sun was not always as welcome a sight — quite the opposite, actually. Many once declared a thin fiery ring burning in the sky an omen; sometimes of bad fortune and sometimes of harmony. For the Greeks, the menacing sight was good enough a reason as any to make peace during times of war, while the Babylonians believed eclipses indicated the death of a ruler, according to Time & Date. Hindu mythology went even further, attributing the absence of the sun to demons who were intent on swallowing it whole, summed up Gap Year.

Despite the superstitions, what all groups were really witnessing was a totally natural event in which the moon moves directly between the Earth and the sun. While this does block the sun’s light, creating a pretty epic shadow and a visually fantastic astronomical display, rest assured that the solar eclipse is harmless in meaning, at least in the eyes of science.

While the science and history behind this celestial phenomenon is fascinating, the appearance of a total solar eclipse actually has a lot to do with pure luck. In fact, the only reason anyone will be able to see a total solar eclipse this year is because the sun just happens to be the perfect size, the moon just happens to be the perfect distance away, and you may just happen to be in the perfect spot to see it all go down, as explained by Time. If that’s not a good enough reason to grab a lawn chair and a pair of binoculars on your next vacation, I don’t know what is.