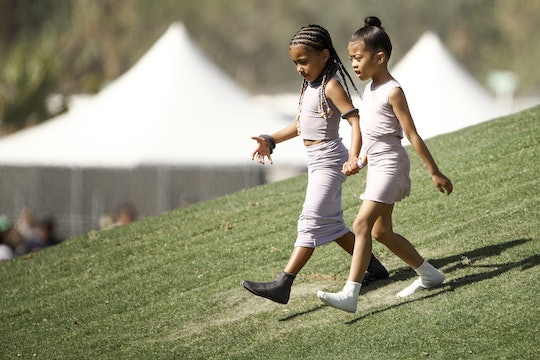 Kanye West's Sunday Services have become a pretty beautiful ritual for the whole Kardashian family in recent months, but perhaps especially for the kids. While the Kardashians and Jenners tend to spend a lot of time at glamorous parties that might not always be appropriate for kids, this is quite clearly just the opposite. Not only are children welcome to attend, but they're also welcome to perform. And perform they did, lucky for us. Three of the Kardashian kids performed at Kanye West's Sunday Services, and their song choice couldn't have been more beautiful.

All three were dressed to match the rest of the choir in white while they sang their version of "Nothing Compares 2 U," the song written by Prince that was initially made internationally famous when it was covered by Irish singer Sinead O'Connor, as The Guardian noted. Although as much as I love O'Connor's version, I have to say these solemn-faced Kardashian kids might be giving her a run for her money with their own rendition.

Saint West in particular seems to really get into his performance near the middle, adding a little jump for effect as he sings with his sister and cousin. This is the 3-year-old boy's first performance at Sunday Services, as it was for Penelope Disick. As for North West, who turns 6 next month... well, she's become one of the most entertaining elements to Sunday Services. And considering how many big name performers have been on hand at the invitation-only event, as reported by CNN, that's saying something.

But honestly, there's just no beating this video of North West dancing to her father's music. It is probably one of the best things about the Sunday Services.

Actually that's not strictly true. If you thought the video of North dancing in the background was amazing, please now enjoy a video her mom shared in April of North full out performing with her dad and the choir.

In head-to-toe orange, dragging her microphone to the front because she refuses to be drowned out by all the powerful voices. Also please note the proud smile on her dad's face in the background if you will.

There were other members of the Kardashian/Jenner clan on hand at this week's Sunday Service to cheer on Penelope, Saint, and North. Kourtney Kardashian was there with her other two kids, 9-year-old Mason and 3-year-old Reign, as well as momager Kris Jenner and Good American jean designer Khloé Kardashian, as reported by E! News. Kim Kardashian has been at each one of her husband's Sunday Services to support him and also to get great video footage of her daughter's burgeoning talent.

But as sweet as it was to see North performing and dancing and being a star, there was something deeply beautiful about seeing those three famous kids singing along with the rest of the choir. Being respectful and reverent and sweet. These Sunday Services, not such a bad idea.