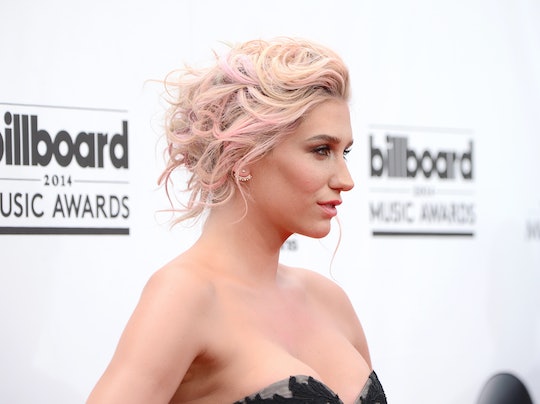 On Friday, New York Supreme Court Justice Shirley Kornreich denied a preliminary injunction to allow Kesha to record music outside of her Sony contract. The singer has a pending civil suit against her producer, Lukasz Gottwald (aka Dr. Luke), alleging that he "sexually, physically, verbally, and emotionally abused" her over a 10-year period "so that he could maintain complete control over her life and career." Adding a new wrinkle to the case are the recently unearthed deposition transcripts in which Kesha supposedly denied that Gottwald ever drugged or assaulted her. You can read them on Scribd. Gottwald has never been charged with any crime and he denied all of Kesha's allegations on Twitter Monday.

The history: in 2011, management company DAS Communications filed a suit against both Kesha and Gottwald. The suit claimed that Kesha had reneged on a contract with them, and that Gottwald had influenced her to do so. In the deposition, Kesha is asked if Gottwald ever gave her cocaine, roofies, or other drugs. She denies that Gottwald ever gave her cocaine or roofies, but in regards to other drugs, she replied "I don't know." When asked whether she ever woke up in Gottwald's bed unable to remember the previous night (an incident specifically mentioned in her complaint against him), she claimed that she didn't remember. She also stated that the two never had an "intimate relationship," and that "Dr. Luke never made sexual advances at me."

Kesha’s attorney, Mark Geragos, told Page Six that "[Gottwald] threatened to destroy Kesha’s life and the lives of her family if she didn’t cover up his sexual assaults in a 2011 deposition. Luke is now following through on his threats." But, reading very carefully, it becomes clear that the statements Kesha made during the 2011 deposition actually don't contradict the 2014 lawsuit. In the 2014 suit, Kesha alleges that Gottwald raped her after giving her with alcohol, and in one case, GHB (also known as the date rape drug). In the 2011 deposition, she denies ever being given cocaine or roofies by Gottwald, and, when asked if he'd ever given her "any drugs which could not be purchased at a pharmacy," she said she didn't know. GHB, or Gamma Hydroxybutyric Acid, is used to treat narcolepsy, and is available by prescription under the brand name Xyrem.

As far as the denial that the two ever had an "intimate relationship," well, I'd hardly call what Kesha is alleging "intimate." And "sexual advances" is a term that's open to interpretation. Let's not forget that less than 20 years ago, the whole nation was embroiled in a debate over what exactly constituted "sexual relations." As for the most specific incident, Kesha allegedly waking up in Gottwald's bed unable to rememeber what happened, she only says "I don't remember." That's certainly not a denial, and it would be impossible to prove that on that day, for whatever reason, she was temporarily unable to recall the incident. It doesn't look like this deposition is going to hurt her case one bit. But Gottwald still maintained in his tweets Monday that the civil suit would reveal the truth, which, in his words, is that he did not abuse Kesha in any way.