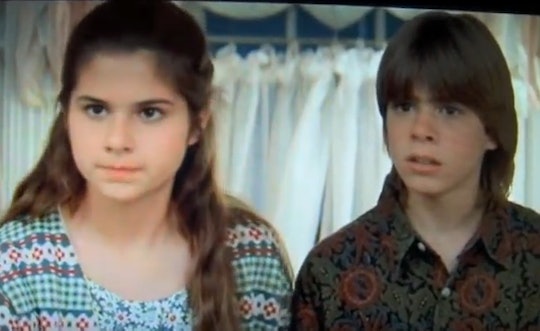 This Reunion Between The Kids From 'Mrs. Doubtfire' & Pierce Brosnan Will Bring You So Much Joy

There's nothing like a laid-back reunion, is there? I'm not talking about those high school reunions that are full of too much expectation and too much fear and (in my case, at least) too much lip gloss. I'm talking about the kind of reunion where you see people you genuinely cared about, people you created something sort of beautiful and lasting with... people you want to see. And I might not have been invited to this one, but when I saw that the kids from Mrs. Doubtfire reunited with Pierce Brosnan for the 25th anniversary of the movie, it brought me great joy. Because they just all looked so happy to see each other.

Mrs. Doubtfire was one of those special movies that so many people quote and recognize for a few reasons. The movie, which was released in 1993, might have seemed like a goofy comedy at first. A vehicle for Robin Williams (playing father and actor Daniel Hillard in the film) to showcase his unmatched skill for doing voices as he disguised himself as Scottish nanny Euphegenia Doubtfire in order to spend time with his kids.

But it actually went much deeper than that. Sally Field played the wife he recently separated from, and Brosnan played her new love interest Stuart. The movie focused particularly on the way everyone deals with divorce, particularly the three kids: Lydia (played by Lisa Jakub), Chris (played by Matthew Lawrence), and Natalie (played by Mara Wilson). And some of the cast members considered it special enough to honor the 25th anniversary with a dinner.

Jakub shared a photo of the grown kids with Brosnan on Wednesday evening. She also shared a sweet video on Instagram the same day, with Brosnan sharing a photo he had taken of the three kids back at the Mrs. Doubtfire premiere in 1993 before panning out to show Jakub, Lawrence, and Wilson all holding hands and grinning. He then says, "Love you, love you all so much. So grateful to be part of your lives."

The whole thing felt very wholesome and sweet and real, which makes me love the movie all the more.

Of course, there were a few key players missing. Field wasn't present, and sadly neither was Robin Williams, Mrs. Doubtfire herself, who died by suicide in 2014 at the age of 63, according to People. But that didn't stop fans from remembering his contribution to this special movie.

Mrs. Doubtfire was one of those movies that resonated with people. It was funny and sweet and well-intentioned, but it was also one of the first movies to really try to take a look at divorce from all angles. No good guys or bad guys, just a family trying to work their way through a difficult experience and come through it whole. Although in reality people don't tend to dress up as Scottish nannies to get extra time with their kids, you get the picture.

I'm glad to know this movie was special for the cast as well. That the kids from Mrs. Doubtfire look back on the experience with fondness. That they all have genuine affection for each other.

It's a very un-Hollywood reunion, and I love it.