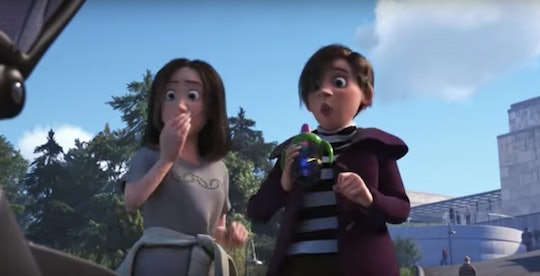 The Lesbian Couple In 'Finding Dory' Is A Step Forward, But There's A Long Way To Go

Since the trailers for Finding Dory first came out, the internet has been abuzz with discussion of what looked to be two lesbians with a baby at the Marine Life Park, where much of the story takes place. There was lots of excitement about the prospect of a Disney feature film, especially the long-awaited sequel to Pixar's beloved 2003 feature Finding Nemo, finally giving LBGT families, and particularly their children, visibility and representation. It turns out that the lesbian couple in Finding Dory gets very little actual screen time, which means that their inclusion is a fantastic step in the right direction, but we still have a ways to go.

It's understandable why LGBT audiences were looking so forward to a Disney flick that features gay characters. As Variety noted, a study by GLAAD found that of the 126 films released by studios in 2015, 22 featured LGBT-identified characters. That's not great representation. Also, none of those films were productions designed to be big box office hits, like a Disney animated film is. When Ellen Degeneres, who voices Dory in the film, showed the trailer on her show in May, people immediately noted the apparently lesbian couple with a baby whose stroller gets hijacked by an octopus. (Hate it when that happens.) People on Twitter were ecstatic. Could it be that Pixar, which The Wrap notes has never officially featured a gay character, was finally acknowledging LGBT individuals and families onscreen?

The answer is that it's not entirely clear. In the film, which is being released Friday, the women are only seen for moments. According to The Wrap, Ellen Degeneres, when asked about the scene, joked that she didn't know whether they're a lesbian couple or just two women, one of which has been subjected to a bad short haircut. When USA Today asked the filmmakers if the couple is gay, director Andrew Stanton replied, "They can be whatever you want them to be," and producer Lindsey Collins added, "We never asked them."

The Wrap noted that even if they are a lesbian couple, some viewers may be disappointed by how briefly they are seen. Variety described the brief scene as a "blink-and-you’ll-miss-it appearance."

But more disappointing, perhaps, is the fact that some are boycotting Finding Dory because of the inclusion of possibly lesbian characters.

As one Twitter user pointed out, those boycotting seem unconcerned that Degeneres, who also voiced Dory in Finding Nemo, is gay.

That backlash alone is a good reason to support Disney and Pixar in presenting even the hint of a lesbian family on screen, however briefly. Some on Twitter have reminded viewers of the theory that, actually, Frozen was the first Disney movie to feature a gay family, so it's possible that Disney has been subtly pushing the envelope toward more progressive representation since before Dory.

But those GLAAD numbers show that there is a lot of progress to be made. LGBT parents and kids deserve to see their families represented in kids movies to underscore the truth that gay families are as legitimate and "normal" as any straight family. Companies like Disney can make a tremendous impact on young lives by demonstrating that through the already complex and endearing characters they bring to life.