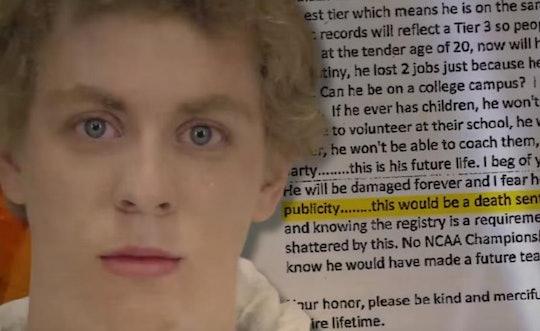 People have been generally outraged when it comes to the case of former Stanford University swimmer Brock Turner. Whether it be the lenient six-month prison sentence he was given, the lack of responsibility or acknowledgement for sexual assaulting an unconscious woman behind a dumpster, or the offensive letter his father, Dan Turner, wrote that sparked intense backlash online for referring to his son's sentence as a "steep price to pay" for "20 minutes of action." Now, the letter Brock Turner’s mom wrote to the judge has been released and it’s truly even more upsetting. Throughout the three-and-a-half page letter, his mother does not mention her son’s victim once as she asks the judge for leniency

Carleen Turner pleaded with Judge Aaron Persky, who presided over her 20-year-old son’s sexual assault case, in the lengthy letter to not send Brock to prison because it would be a “death sentence.” She wrote,

"I beg of you, please don’t send him to jail/ prison. Look at him. He won’t survive it. He will be damaged forever and I fear he would be a major target. Stanford boy, college kid, college athlete — all the publicity. This would be a death sentence for him."

She continued to write in great detail about the “exemplary” life Brock has led thus far through his dedication to swimming, his contributions to his community, and his romantic gestures with a past girlfriend.

"He has never been in trouble, never even had a demerit in high school, he studied, swam worked hard. His dreams have been shattered by this. No NCAA Championships. No Stanford degree, no swimming in the Olympics (and I honestly know he would have made a future team), no medical school, no becoming an Orthopedic surgeon."

Mrs. Turner wrote how the legal proceedings since January 2015 have "destroyed" her family's life. But, still, not once has any member of the Turner family mentioned how the victim's life has been affected since the night she was sexually assaulted. She continued on the aftermath of the verdict,

"This verdict has destroyed us. Brock is a shattered and broken shell of the person he used to be. My once vibrant and happy boy is distraught, deeply depressed, terribly wounded, and filled with despair. His smile is gone forever — that beautiful grin is no more."

The letter by Brock’s mother is just as infuriating as his father’s, which was made public last week. In the letter, he described the sexual assault not as that, but as “20 minutes of action” and said his son’s life has been deeply affected because he no longer has the appetite for his favorite foods and hasn’t been able to eat a “big ribeye steak.”

Brock’s parents have pleaded with the judge to show further leniency for their son — his father suggested probation would be an appropriate punishment — because, as his mother wrote, Brock will continue "to pay for this for his entire lifetime."

Brock has yet to take responsibility for the sexual assault he was found guilty of by a jury. His father’s letter also failed to acknowledge his son’s action in the slightest and does mention the victim of this case once. But, the fact that the letter by his mother also completely ignored how severely the victim’s life has been changed — or that she’s suffered or is a victim at all — is absolutely infuriating and teaches us our society that there is a lot of work to be done to fight for sexual assault and rape victims to change the course of future discussions.