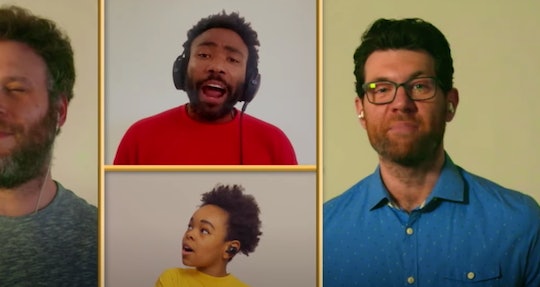 As if The Disney Family Singalong: Volume II couldn't get any more exciting, The Lion King cast will reunite for the TV performance — and the preview looks amazing. But how could it not be with such a powerful line up?

This Sunday, May 10, some of the most beloved performers will sing their favorite Disney songs from the comfort of their own living room for ABC's The Disney Family Singalong: Volume II. While the full list of numbers sounds absolutely incredible, there is one performance that people really won't want to miss. The cast of the 2019 live action remake of The Lion King — Seth Rogen, Billy Eichner, Donald Glover, and Walter Russell III — will sing "Hakuna Matata," the movie's catchiest song.

ABC released a sneak peek of this performance on YouTube (because waiting until Sunday is hard) and it looks incredible. In the video Rogen and Eichner — who voiced Timón and Pumbaa — sing about the "wonderful phrase" while Glover and Russell III provide their vocals as Simba at different ages. The clip may be short, but it's so uplifting.

As people stay home this Mother's Day because of the current coronavirus pandemic, everyone could use a reminder about having no worries for the rest of your days.

During an appearance on Good Morning America on Friday, Eichner said that he's looking forward to having people watch their performance. "It's a great group of people," he said. "And Seth Rogen and Donald Glover and I sang 'Hakuna Matata' obviously in The Lion King last year. But we've never sang it 'live' so to speak."

The cast of The Lion King won't be the only ones to perform live from their homes. Shakira, John Legend, Christina Aguilera, and Josh Gad are among the other big names who will sing some classic Disney songs. Lyrics will be displayed on screen at the same time as the performances so viewers can sing and dance along at home — because it wouldn't be the The Disney Family Singalong: Volume II if you couldn't sing along with it.

The special airs this Sunday, May 10 on ABC at 7 p.m. EST and be uploaded to Disney+ to stream at any time in the following days.