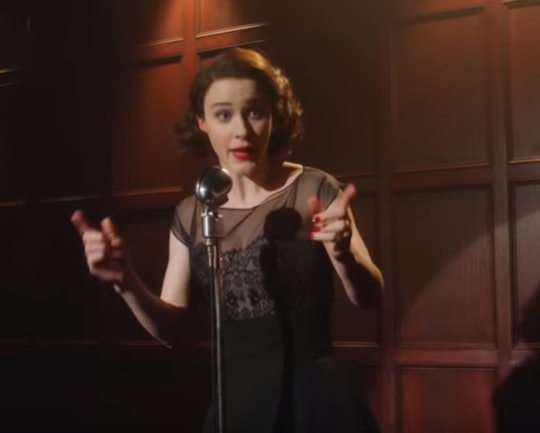 'The Marvelous Mrs. Maisel' Season 2 Will Be Here Sooner Than You Think & It Looks AMAZING

If you haven't been blessed enough to watch The Marvelous Mrs. Maisel yet, I'm so excited for you. Because this means you are about to be exposed to the most delightful show you've seen in years. I mean who doesn't love quick-witted humor, snappy dialogue that always rings true, and a quirky soundtrack all set in New York city in the 50s? With Rachel Brosnahan charming the pants off of everyone she sees as a divorced woman trying her hand at stand-up comedy? Trust me, you'll want to get caught up, because The Marvelous Mrs. Maisel season two trailer and premiere date have dropped.

So let me whet your whistle for Amazon Prime's absolute best show, in my totally biased opinion. The Marvelous Mrs. Maisel, which was created by the writing team of Dan Palladino and Amy Sherman-Palladino of Gilmore Girls fame, tells the story of Miriam "Midge" Maisel. Midge is a well-heeled Jewish housewife living on the Upper East Side of Manhattan in the 1950's with her husband Joel and two small kids. She and Joel are not your average couple; Joel is a businessman who tries his hand at stand-up comedy and Midge totally supports his efforts. Unfortunately, Midge is secretly way funnier than her husband. And when he decided to leave her for his secretary, she sort of accidentally finds her way to the stage. In the most hilarious and oddly empowering way.

The show has been seriously well-received, due in no small part to Sherman-Palladino's keen ear for snappy dialogue and the undisputed charm of Brosnahan. The show won the Golden Globe for Best Comedy Series in 2018, while Brosnahan nabbed the 2018 Golden Globe Best Actress in A Comedy Series category. The Marvelous Mrs. Maisel also won eight Emmys in 2018 including comedy writing and directing for the Sherman-Palladinos, best supporting actress for Alex Borstein (who plays Midge's tough-but-also-mean manager), best comedy series and best actress.

And honestly, it could not have gone to a more charming show. Which is why everyone is so excited to see not just a second season trailer, but also a firm premiere date and even a delicious looking poster.

The second season of The Marvelous Mrs. Maisel is set to drop on Dec. 5, which is barely even that far away. In season two, it looks as though Midge still hasn't told her friends and family about her comedy career. Which is a shame, because she would still be killing it even if she was around in 2018 as a stand-up comedian. Case in point, this little gem from the trailer that rings oh-so-true even today:

Men in general run around telling everyone only men are funny. Comedy is fueled by disappointment and humiliation. Now who the hell does that describe more than women?

We all have about six weeks or so to either get acquainted or reacquainted with The Marvelous Mrs. Maisel. Because she's finally coming back, and I could not be more excited.