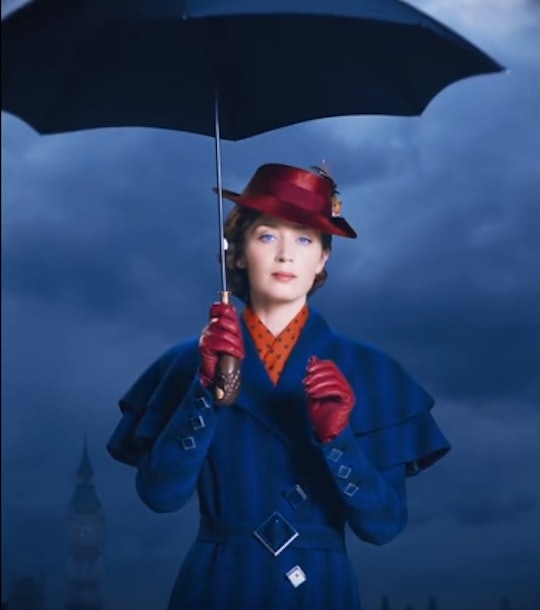 The Oscars are basically the biggest deal in Hollywood. I feel like nobody ever looks better than they do on Oscar night, and in an industry of obnoxiously beautiful people that's saying something. Plus, everyone is so celebratory and happy to show off their best work, they should really be the focus of everyone's attention, yes? Nope. As soon as the Mary Poppins Returns trailer came on screen, I was done. Because it was practically perfect in every way.

Fans all over the world remember the original 1964 version of Mary Poppins, the beloved classic starring Julie Andrews as the eponymous Mary Poppins, the mystical nanny who arrives on the doorsteps of the Banks children in their time of need. Along with her friend Bert, the incredibly nimble chimney sweep played by Dick Van Dyke, Mary helps the Banks children become closer to their father. It was a colorful, beautiful, musical romp of a film, full of hope and sweetness and so much Julie Andrews you wouldn't even believe it. And now, a mere 53 years later, we are finally going to get to find out what happens to Mary Poppins and the Banks family after they all (spoiler alert) head out to "Go Fly A Kite" together.

In this next incarnation of Mary Poppins, Emily Blunt plays Mary Poppins. And, as a lifelong fan of Mary Poppins who has dreamed frequently of having a nanny much like the woman herself (even now), I would like to offer my ringing endorsement. In the newest trailer, which was shared during the Oscars on Sunday, Blunt manages to embody that same perfect blend of sweet and salty as the original Mary Poppins, Julie Andrews. I mean, even the dress she wore to the Oscars had a tiny hint of that Mary Poppins whimsy.

Blunt will be joined in the 2018 version of Mary Poppins by none other than Hamilton's Lin-Manuel Miranda, who also manages to embody that old school whimsical magic that really was the trademark of Disney at the time. Miranda plays Jack the Lamplighter, and is expected to bring that same song-and-dance clout that Dick Van Dyke brought so long ago.

In the newest trailer for Mary Poppins Returns, the main character seems to be the kite we all remember from the last scenes from the 1964 movie. A kite floats through the air in a foggy, dreary looking London, knocked away from landing on a man's hat before being caught in the hands of Jack the Lamplighter. He takes the kite, along with a young boy (the son of Michael Banks) to the park. Where something (or someone) else is floating down from the sky. And if you didn't cry when you saw Mary Poppins and her umbrella for the first time, I'm sorry about your cold, dead heart.

In Depression-era London, a now-grown Jane and Michael Banks, along with Michael’s three children, are visited by the enigmatic Mary Poppins following a personal loss. Through her unique magical skills, and with the aid of her friend Jack, she helps the family rediscover the joy and wonder missing in their lives.

Rob Marshall, who brought the magical Into The Woods to the screen, is directing the new film, which is set to be released on Christmas Day, 2018. So basically, we just have to try to make it through the rest of this year and then Mary Poppins will come down to save us again. With a supercalifragilisticexpialidoscious spoonful of sugar, just for you. And yes, I just spelled that all by myself.