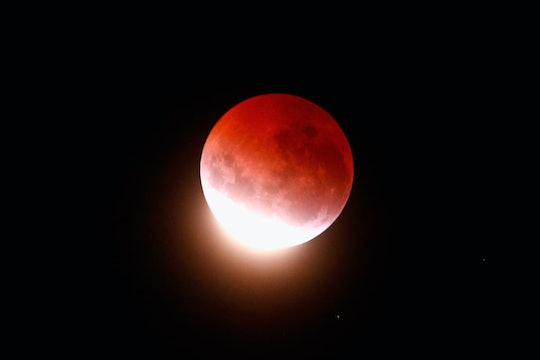 Does The Super Blood Wolf Moon *Really* Have A Dark, Foreboding Meaning?

I am a skywatcher. While intellectually I understand that my moods and the course of human events aren't dictated by the astronomical whims of the universe, I can't help but be intrigued by the fierce quality of its majesty. In the winter everything feels especially crisp and visible, as though it's all a part of the earth's hibernation, and we are merely its witnesses. This month brings a special lunar event to our shores, and the meaning of the super blood wolf moon is fascinating from both a cosmic and spiritual standpoint.

You're probably wondering about the "blood" part more than anything else. This upcoming eclipse is a total lunar eclipse, in which the moon appears darkened as it passes into the Earth's shadow, giving the moon a deep crimson appearance. It also appears especially large, or "super," as The Weather Network noted, because this is a lunar eclipse that's happening when the moon is at its perigee: the place in its orbit where it's closest to Earth.

Forbes reported that the terms "blood moon" and "wolf moon" are just different indigenous names for a red-tinged moon that falls in January (when the wolves howl with hunger), much like how we have names for our months and seasons. Based on this metric, it could just as easily be the "Hunting Bear" moon, or "Fish Running" moon, according to historians at Western Washington University.

But as The Weather Network reported, other, less scientific meanings (or superstitions) do exist: "'Blood Moon' obviously refers to the red color of the Moon during a total lunar eclipse, but has connections to the biblical account of apocalypse in the Book of Revelations." Hence the lingering doomsday vibe.

Beyond all of the catchy nicknames and folklore, there is something powerful about experiencing the beauty of this event. It's not like the solar eclipse you have to turn away from, or use special glasses to view. It's the night shift of the planets. It feels essential and primal. Sutherland noted that in the winter, these types of events are more easy to see because the sky is clearer and the moon brighter. They said that the eclipse will be at its peak on January 21 at 12:12 a.m. This might be inconvenient on the eve of any other Monday, but this Monday is Martin Luther King Day, so lots of people won't have to get up for work or school.

The moon will also be bright and bold in the evening leading up to the eclipse, and according to National Geosciences, the earth reacts by experiencing more tremors than at other times. As Forbes noted, there's also a higher likelihood that earthquakes will follow the high tide periods during a lunar eclipse, but that's still a rare occurrence, so don't stand in your doorway just yet. Scientists say this heavenly happening is mostly just a fun thing to look at.

The meaning of the super blood wolf moon for astrologers is something different. They are concerned with how the shifts of the tide and the light out effect of the eclipse could mess with your groove, and put a slip in your step. The astrologers at Astrology Zone wrote that it's not all bad, though. They said that "Eclipses are dramatic 'wildcards' in our horoscopes. They are some of the most dramatic tools that the universe uses to get us to pay attention to areas in our life that need to change." What better time of year for upheaval, then just when you're giving up on your New Year's Resolutions. Perhaps it will break you out of your lull, and move you in the direction of change.

No matter what your beliefs are, one thing is universal: it's going to be gorgeous. Not only will the moon look so close that you could stroke its surface, but you'll get to watch as shadows dance across its face, obscuring the light for just a blip of time. There isn't much in the way of true magic in this world, but this comes pretty close.

Editor's note: This post has been updated with the correct definition of a lunar eclipse.