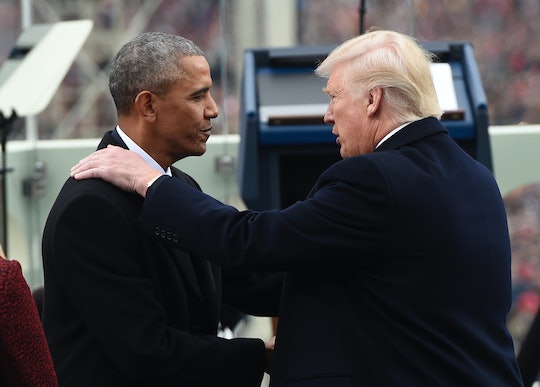 The "Mess” Trump Inherited Vs. The One Obama Got

Oh look, it's a another day ending in "Y" so that means it's time for another round of America's favorite game: "What did President Trump say today?" On Thursday, President Donald Trump gave his first solo press conference at the White House. In characteristic fashion, Trump attempted to discredit the media calling it "fake news" and then attempted to deflect any questions away from the growing dumpster fire of his first 28 days in office. See, it's not really Trump's problem because he "inherited a mess," as he said during his press conference. Here's the thing though: The "mess" Trump inherited doesn't exist — compared to the actual mess President Obama inherited eight years ago.

Here's a quick snapshot of how America looked the day before Trump took office: The unemployment rate fell to under 5 percent. Violent crime is down. Hell, even Americans are living longer. Other items of note: Same-sex marriage is legal. More Americans have healthcare than ever before. Remember, all of this was just 28 days ago. And yet somehow, Trump seems to believe all of the progress made in the past eight years somehow constitutes a "mess" that was left for him. Looks like Trump either has a terrible memory, or he's dealing in "alternative" facts again.

Here's what a real "mess" looks like. This is what the economy looked like when Obama took office eight years ago — and it sure looked a whole lot different than it does for Trump. America was still reeling from the collapse of the Lehman Brothers financial institution that happened two months before the 2008 election. The country was a little over a year into "the Great recession" and the unemployment rate before Obama took office was more than 7 percent. Folks, the economy was in rough shape the day Obama took office: The Dow Jones Industrial Average was just under 8,000 points.

When Trump took office — again, just 28 days ago — he has inherited a fairly robust American economy, despite what he'd have you believe on the campaign trail, or worse, during his doom and gloom "American carnage" inauguration speech. In fact, economists from Standard & Poor said in December that Trump "will inherit a much stronger economy than his predecessor did." On the day Trump took office, the DJI was more than double that of what it was on Obama's first day.

At Thursday's press conference, President Trump said, "ISIS has spread like a cancer. Another mess I inherited." It's true that ISIS did not exist when Obama took office: ISIS came to power in 2006 in the wake of instability following the nation's wars in Iraq. But, contrary to Trump's claims during his campaign, Obama was not the founder of ISIS. And while Trump may have inherited the continuing war on terror, Obama inherited two wars with actual American troops on the ground.

So far, Trump's only military action as president involved approving a botched raid in Yemen that resulted in the death of a U.S. Navy Seal, the wounding of three other American soldiers, and the deaths of nine children.

Trump either has a terrible memory or lives in an alternate reality entirely if he thinks he's inherited a "mess" from Obama. If this is a "mess," what on G-d's green earth does "clean" even look like to Trump — blanket world peace with rainbow unicorns pooping doves holding olive branches out of their butts? Because, as we all know, Trump is not opposed to more nuclear weapons or to using them.

Yes, President Trump: Please do tell us how you intend to "clean up" this "mess" you've inherited without undoing a whole lot of good.