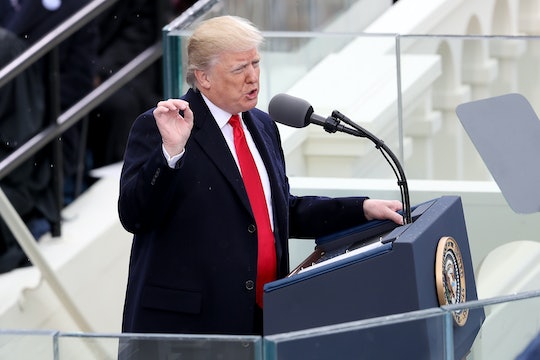 Donald J. Trump has just been inaugurated as the 45 President of the United States. In his first speech as president, Trump referred to what's happening in this country as "American carnage." Trump's inauguration speech seems to have colored the nation with a dark wash of doom and gloom, which is an odd way to start a presidency. But in truth, should we really be that surprised? Trump's inauguration speech used the same bleak narrative that dominated his campaign; some analysts have already pointed out that Trump's inauguration speech felt like another campaign stump speech. Even his slogan, "Make America Great Again," implies that there must be a lot wrong with the nation right now if he thinks we need to go back to some earlier moment of greatness.

Within the first few minutes of his speech, Trump described the America to which he's been witness, with "rusted out factories scattered like tombstones across the landscape of our nation." He spoke of women and children trapped in inner city poverty, and, strangely, of the American education system as "flush with cash." Oh, and then there are all those gangs roaming the streets of our nation:

...The crime and the gangs and the drugs that have stolen too many lives and robbed our country of so much unrealized potential. This American carnage stops right here and stops right now.

And of course, #AmericanCarnage is already a Twitter meme.

But let's just take a step back for a moment. Eight years ago our incoming president spoke of hope and change. Now President Trump thinks we're leaving in an era of crime, gangs, and American carnage. While I fully recognize that I live a pretty comfortable life of privilege, I would hardly call the state of our nation "American carnage" right now. Are there problems that need fixing? Sure. But, like so many of Trump's speeches and statements to the public, he's just wrong on his facts.

The number of uninsured Americans is at an all-time low. The national unemployment rate is under 5 percent — down from over 10 percent after Obama took office and the nation's massive financial crisis. And no matter how many times Trump would say the opposite — even on Friday standing before the nation as her newly installed president — violent crime is down in the United States.

Sorry, Mr. President: I just don't see what all this American carnage is that you're talking about. But maybe that's what the world looks like to you a hundred stories above the pavement from your tower in Manhattan.