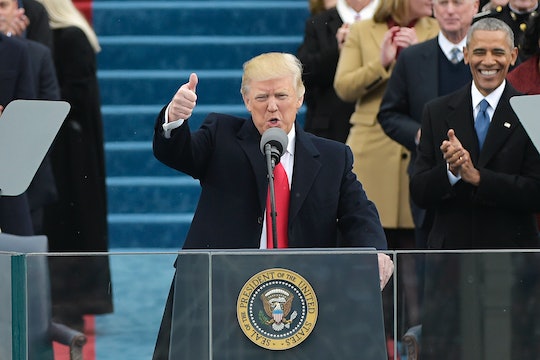 On Friday, during his official inaugural address, President Donald Trump said that, under his leadership, "this American carnage stops right here and stops right now." It's a bold claim for a president who's inheriting a strong economy and low crime rate. That's why these "American Carnage" memes and jokes are foretelling of the next four years.

In his first speech as 45th president of the United States, Trump vowed to the crowd that he would "make America great again," just as he has done throughout his divisive campaign. He relied heavily on this false narrative that America is in the tubes and needs saving from eight years of Barack Obama — although, during his two terms, the now-former president lifted the country up from debt and out of a recession. Trump evoked images of rural blight, crime-ridden streets, and industrial wastelands to paint this picture of "American carnage" from which he will save the country. Although a segment of the population buys Trump's words, what he has said is not exactly true, as FactCheck.org points out.

As NPR noted, Trump's rhetoric on Friday promoted "a populist, anti-establishment message" that promises to give power back "to the people" from Washington Insiders. That's directly in opposition to his cabinet picks, many of whom happen to be wealth billionaires with a lot of power on Capitol Hill. (But sure, he's going to "drain the swamp.")

Across the board, op-ed columnists, pundits, and public figures gave their opinions of the heavy speech. "George Washington gave us the ambition of a quadrennial, peaceful, democratic transfer of power," The New York Times' Andrew Rosenthal wrote on Friday. He continued,

Abraham Lincoln appealed to our better natures and our charity in the midst of civil war. Franklin Roosevelt gave us the strength not to be afraid. John Kennedy inspired us to serve our nations. Ronald Reagan talked of a prosperous America as a beacon of democracy around the world. And Barack Obama talked about the hope of which he was the living embodiment.

Trump’s vision of America on his Inauguration Day was as it has been throughout his campaign – dark and angry.

Whatever you thought of the speech, the pomp and circumstance, and the transition of power, one thing was very clear at the end of the day: Americans got Trump's message — and to no one's surprise, they were more than happy to run with it.