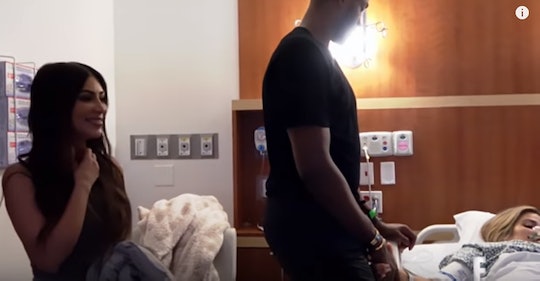 It's sort of surreal to watch Khloé Kardashian's birth experience on Keeping Up With The Kardashians right now. Because we've all lived through it from the sidelines, we all sort of know the story and much of the outcome. But here's what we're seeing for the first time: the rest of the family's reaction to all the drama. And I won't lie to you, I'm really here for it. Especially the moment Kim Kardashian sees Tristan Thompson in Khloé's delivery room. It was super tense, even if Kim says it wasn't tense at all. Cameras don't lie, Kim.

Let's all get reacquainted with what was going on at the time. It was early April and Khloé was in super nesting mode in Cleveland for the last few days of her pregnancy. Her boyfriend Tristan was in New York for a game with his team, the Cleveland Cavaliers, when video footage purported to show a man appearing to be Tristan with another woman while Khloé was still pregnant with their daughter. Tristan Thompson's reps have not yet returned Romper's request for comment.

The entire Kardashian/Jenner family was made aware of it, as we saw on Keeping Up With The Kardashians, and was unsure how to react. Especially considering Khloé was on her own in Cleveland and due to give birth any day... the decision was taken out of their hands when she went into labor.

Kris Jenner, Kim, and Kourtney all hopped on a plane to be by her side, along with Khloé's best friend Malika Haqq.

Who else was by her side in the hospital as she was going through contractions? None other than Tristan Thompson. And that's when things got super awkward.

When Kim arrived in the hospital room, she seemed to be doing everything she could to avoid Tristan — except when she was pretending to choke him from behind, that is.

Eventually Khloé asked the two to say hello and they did one of those awkward side hug things. But Kim was making it very clear that she was not into having to see Tristan after he allegedly cheated on her sister.

Kim has a bit of a reputation for being protective of the people she loves, especially people in her family. And she made it patently clear on the previous episode that she was super unimpressed with Tristan's alleged behavior. In fact, she gave the expectant mom some pretty tough advice on how to deal with Tristan on a previous episode, as she admitted to sister Kourtney, telling Khloé as reported by Entertainment Tonight:

What are you going to get out of him? I go, "Think about it, you're gonna be worried and nervous and have an insecure life. Because if he's not faithful now, he'll never change."

Despite her tough talk, nothing was going to stop Kim from being by her sister's side when she gave birth.

I love that Kim is openly protective of her sister, and not just because it makes for excellent television watching either. I love it because it says something about her as a person. That she's loyal, that she loves her people... and that she's willing to hang out in a super awkward situation if it means being there for Khloé.