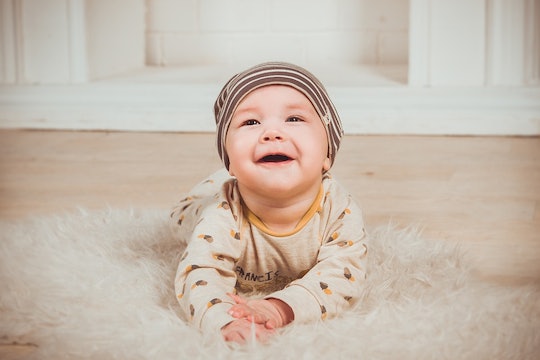 Step Aside Emma, These Are The Most Popular Baby Names Of 2017

Gather 'round, expectant moms and dads, because the list of the most popular baby names of 2017 is here. And whether you want to follow the trends or go as far in the opposite direction as possible when the time comes to name your own baby, you definitely want to know which names got the most love over the past year. Nameberry, the world's largest baby name site, just shared some fascinating information about what kinds of names parents are giving their kids. One thing's for sure: These names are pretty freakin' different than those of the parents choosing them.

Nameberry measures which names are most popular by analyzing how many page views each one receives, as well as how many babies get these names. The results show, first and foremost, that parents are considering style above all else when deciding what to name both girls and boys. (Previously, according to Nameberry, which names were most popular for girls would fluctuate more from year to year as parents chose family and traditional names for their sons.)

Now, with Olivia earning the top spot for a second year in a row on the girls' list and Atticus soaring from its spot as the 360th most popular for boys in 2016 to #1 this year, all that seems to be changing.

That said, let's start off the the 2017 top 10 names for girls, According to Nameberry, here they are in this order:

Of these, according to Nameberry, Cora, Maia, and Amara are newcomers to the top 10 this year. There are also several girls' names that made their debut on the top 100 this year. They are Alexandra, Allegro, Brielle, Celeste, and Elena. Rumi, which is also the name of an ancient Muslim male poet and, more importantly, the name of Beyoncé and JAY-Z's new baby daughter, also made the list for the first time.

And here are Nameberry's top 10 names for boys this year:

Those new to the top 10 are Theodore, Jasper, and Wyatt. And for the boys, there is a whole slew of names that reached the top 100 for the first time in 2017: Adam, Augustus, Caspian, Charlie, Dante, Edward, Emmett, Everett, Ian Jonathan, Kane, Kian, Magnus, Maverick, Rhett, Winston, and Xander.

Elsewhere in the baby name tracking industry, it's becoming clear that significant trend has emerged across the pond: gender neutral names. According to England's the Manchester Evening News, BabyCentre's baby name registrations shows that, for 20 names, at least a quarter of registrations were for both sexes. These include Riley, Frankie, and Harley.

There were, of course, many babies born this years whose names did not make it onto either the top 10 or top 100 lists for boys or girls. But what these names lack in popularity they certainly make up for in personality. Parents shared the names of more than 500,00 babies over the course of the year with BabyCenter, which in turn came up with a list of the most "unusual" names some babies ended up with this year. These range from Queenie to Fox to Oceana to Sedona to Prosper to Nero to Zenith.

Clearly, there are names out there that are sure to appeal to the most traditional and the most creative parents out there alike. And if that's not the case, you can alway make up your own name for your little one. Who knows, maybe your original name will end up on a top 10 list sometime a few years or decades from now!