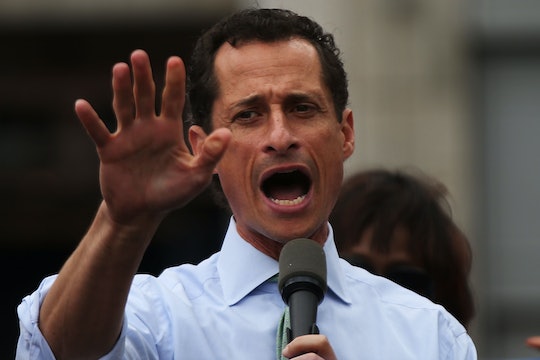 The Most Recent Allegations Against Anthony Weiner Are Disturbing - REPORT

It's time someone seriously considered taking Anthony Weiner's cell phone privileges, perhaps; the former New York lawmaker is back in the news with more scandal. According to The Daily Mail, Anthony Weiner is up to his old tricks. Except this time, the allegations against Anthony Weiner are more disturbing than ever.A message sent out to Weiner for a statement regarding the recent allegations was not immediately returned.

The Daily Mail reported that Weiner and a 15-year-old girl (who has not been named to protect her identity) have been engaged in an online relationship since January 2016. Messages shared with The Daily Mail allegedly revealed that Weiner was aware the girl was underage and a sophomore in high school. The 51-year-old Weiner allegedly repeatedly messaged the minor, sending her pictures of himself shirtless and sometimes in boxers and even asking her to undress. Weiner also allegedly sent particularly lewd messages about how the young girl affected him physically. Weiner reportedly confirmed with The Daily Mail that he had participated in an ongoing "flirtatious" online exchange with the girl but did not provide details. He released a statement which read in part:

I have repeatedly demonstrated terrible judgement about the people I have communicated with online and the things I have sent. I am filled with regret and heartbroken for those I have hurt.

This isn't even close to the first time Weiner has gotten into hot water over his sexting habits. In 2011, Weiner was forced to abandon his bid for Congress when he was reportedly caught sharing sexual online messages with a college student. His 2013 online dalliance with 22-year-old Sydney Leathers cost him his very likely shot at becoming Mayor of New York City (and also introduced us to his preferred nickname, Carlos Danger, which he mentioned in his conversations with the 15-year-old).

Most recently, Weiner was reportedly engaged in an online relationship with a 40-year-old woman; more provocative pictures were sent to this woman, but this time allegedly while his four-year-old son, Jordan Zain Weiner, was curled up in bed beside him. Authorities began investigating when this photo came to light, according to The Daily Mail.

In August, the former congressman's wife decided to leave him. Huma Abedin, Weiner's wife of four years and mother of their son, is a top political aide for Hillary Clinton. According to The New York Post, Abedin released a statement at the time that read:

Anthony and I remain devoted to doing what’s best for our son, who is the light of our life. During this difficult time, I ask for respect for our privacy.

The young girl involved in Weiner's most recent scandal will reportedly not be pressing charges, according to The Daily Mail, because she believed their relationship was consensual. She and her father reportedly agreed to sit down with the publication simply because they were concerned that Weiner could be sending similar messages to other minor girls.

The girl's father, whose name has been withheld to protect his daughter's identity, did not contact authorities out of concern for his daughter's mental well-being, according to The Daily Mail.

I agreed because her mental health is in jeopardy and I didn't want to exacerbate anything that she has mentally going on.