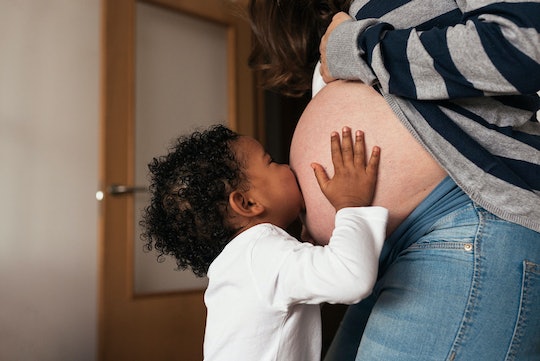 Pregnant With #2? Get Ready To Welcome A Bundle Of Guilt

While your first pregnancy might have you nervous about what giving birth is actually like and what kind of parent you will be, your second pregnancy can involve even more complex feelings. For some moms, one of the most surprising emotions during a second pregnancy is guilt. And if you’re feeling this way now, don’t worry, you’re certainly not alone. It’s actually pretty common, as you'll see from the moms who were willing to share their own thoughts and feelings on the matter with Romper.

Anna Hockman, 28, became pregnant with her second child shortly after her son turned 1. The Colorado-based mom worried immediately how a new baby might affect her relationship with her first born, but says the guilt didn’t truly set in until her pregnancy fatigue took a toll.

“Suddenly, I didn’t have the energy to play with my toddler. Many days, it was a choice between cleaning and laundry, or time with my son... I would hand my firstborn a new toy out of guilt.”

But after her baby was born, Hockman realized she would still have plenty of time for her first born, especially since newborns spend a lot of time sleeping.

“It is so much better than my pregnancy hormone laden brain led me to believe it would be,” she admits.

It was even more complicated for Rebecca Christensen, a 36-year-old mom and owner of Quaker Street Soap Co.

Christensen was a single mom for most of her first child’s life, and felt guilty immediately after finding out she was pregnant with her second 11 years later. The guilt was exacerbated due to the fact that her oldest has an autoimmune disease that requires round-the-clock monitoring.

“I have had nights that I have been so exhausted from being up for days with the baby that I have slept through medical alerts for my oldest. That haunts you!” Christensen confesses.

As a result, her eldest has begun working more on her own self care, with the help of Christensen’s partner. But it’s not all bad, she says.

“My girls love each other to pieces, so at the end of the day, I feel the guilt subside.”

There is often a lot of guilt around how the second baby’s experience will be different than the first child’s, and whether the older sibling will still feel special and loved.

For marketing director-turned-stay-at-home mama Danielle Deene, the feelings of guilt began even prior to pregnancy. Deene opted for IVF again while her firstborn was still a baby and became pregnant almost immediately. But because she would need a planned c-section, she knew she would be unable to carry her eldest child for those initial six weeks postpartum — a huge shift from holding her firstborn eight hours a day.

“It was tough, but we had my (retired) dad and my mother-in-law (also retired) available... for the first five weeks to help normalize everything for big bro.”

While these guilt-laden emotions follow some mamas into their journey as mothers of two, others are fortunate enough to find peace sooner than that. Fellow Romper writer Jamie Kenney of Connecticut found that her eldest son actually dealt with the arrival of his baby sister quite well.

“I’ve never had a minute of trouble with jealousy or maladjustment. I don’t know how we got out of that one, but I’m really glad it wasn’t an issue.”

Suffice to say, your mileage may vary, and plenty of families adapt to their new situation with ease. But the moms I spoke with all seemed to have some great advice to impart on moms who are currently struggling with second-pregnancy guilt.

“It may feel like you’re taking away one-on-one time from your child now, but ultimately, you’re giving them the gift and bond of another sibling. That is so important. That is a relationships they cannot get from anyone else!” This is 36-year-old mama Lindsay Guerrero, whose source of guilt went from being unable to spend more time with her eldest to not spending as much hands-on time with her youngest.

Other moms noted that taking walks in the fresh air, journaling, and talking to loved ones or even mental health care professionals about the guilt they were experiencing were all beneficial for them in this time.

Sarah Tie, a registered psychotherapist and owner of Winding Path Counseling, is also a mom who experienced second-pregnancy guilt. Tie says guilt isn’t all that common in a first pregnancy, but for the second one? It’s par for the course.

With second pregnancies, there is... some sadness in losing the unique bond you both have.

“There is often a lot of guilt around how the second baby’s experience will be different than the first child’s, and whether the older sibling will still feel special and loved. Once the new baby is born, the older sibling almost always goes through a period of adjustment that can involve regression in behaviors, like trouble with sleep, potty training, or tantrums. This is totally normal, but it often increases a mom’s guilt that she has made life more difficult for her first child.”

“With second pregnancies, there is a combination of both guilt and anxiety: how will my first respond, etc., and some sadness in losing the unique bond you both have," says Rachel Eddins, a licensed professional counselor at Eddins Counseling.

More than anything, Eddins wants to remind moms to trust in the resiliency of children.

“Your child and your family will adapt to the change... Consider what support you need as well as recognizing that change isn’t easy for anyone, but in the long run, you will love your family just as you did when your first was born.”

Eddins suggests preparing by talking to your first child about the new baby, and focusing on quality versus quantity in terms of the time or attention spent on your eldest.

Tie also advises that moms not leave themselves out of the equation.

“When you are working out what is best for your kids, do not forget to take into account what is good for you, too. It is impossible to live up to the current standards of parenting, and you will drive yourself crazy if you try; so take your foot off the brake, cut yourself some slack, and remember that you deserve to be happy and healthy in addition to your kids. They will be fine, and will thrive, even with a little less one-on-one time from you.”

More Like This
100 Pregnancy Milestone Instagram Captions For Every Memorable Moment
Sex And Mom Guilt: When I Date Someone New, Am I Cheating On My Kids?
30 Marvelous Baby Boy Names That Start With “M”
Can You Have Sex With Placenta Previa? Experts Explain