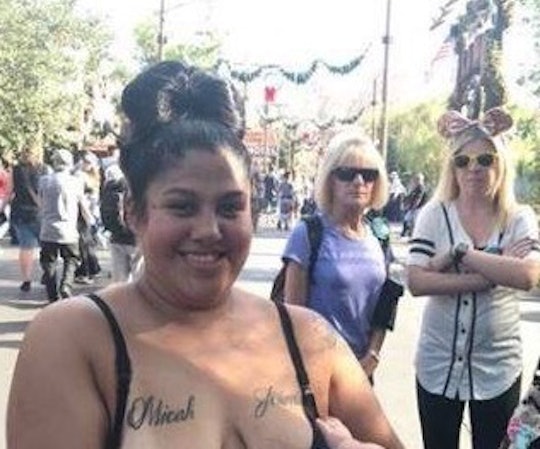 There's no question that breastfeeding is still a hot topic these days, considering how many stories (and pics) related to nursing moms go viral. Over the past year alone, we've seen tales about women nursing under funny, frustrating, or unusual circumstances generate countless opinionated comments time and again, but the most viral breastfeeding moment from 2017 really changed the game.

It was just an average day at Disneyland for California mom Brittni Medina, until her 10-month-old son got hungry while they were waiting on a long line to get their picture taken. As so many nursing women have chosen to do in similar situations, instead of getting out of line just to start all over again at the end of the queue, Medina decided to just nurse him right there. (Which, if you've ever breastfed a 10-month-old while standing up, is a pretty impressive feat.)

Breastfeeding in public is legal in the state of California, so no big deal, right? Except, of course it was a big deal, because too many people still don't know how to handle the sight of bare breasts in any capacity. Medina had the last laugh, though: Instead of covering herself up or going off to cower in a corner when a couple of women nearby started complaining out loud, Medina had her husband snap a photo of her cheerfully feeding her son with the cranky ladies in the background. "Peep the haters," she wrote.

Medina posted the pic on the Facebook page Breastfeeding Mama Talk on November 19, where it immediately blew up. To date, the original post has received over 9,000 reactions, 2,000 comments, and 1,000 shares on Facebook alone. Subsequent coverage in several media outlets have resulted in well over 30,000 shares.

Somewhat encouragingly, many of the comments have been encouraging (with commenters calling Medina a "badass" and applauding her confidence and sense of humor). Far less encouragingly, of course, plenty of comments have been disgustingly cruel and hateful, attacking everything from Medina's tattoos to her son's age — but the mom is simply not having it (good for her!). As she wrote in an update to her original post:

"...I don’t need your approval! Disney policy and the law fully support me. Boobs are not sexual! If you can’t inform your kids a baby is eating that’s not my issue. Am I normally this 'exposed' when I feed my son? No! But not all moments as a mother are glamorous! In this moment he is a big boy and is pulling on my nursing shirt! I never expected the picture to go viral obviously it’s not the best one of me but I love it because again not all mom moments are glamours."

Exactly! It's this spunky, almost gleeful disregard for the shame police that made this post such a game-changer. We've heard other stories this year of nursing moms with a similar spirit of healthy defiance: The woman who posted a nude breastfeeding pic to demonstrate that nudity is most definitely not always sexual or the recent (and stunning) photoshoot meant to empower black, breastfeeding moms. But we've also heard about horrible examples of disrespect and misunderstanding, like the Mumbai mom who was towed while breastfeeding her son in the backseat of her car or the woman whose own mother threw her out of the house for breastfeeding.

The point is, those woman glaring at Medina in the background of her photo are, sadly, not alone in their criticism. And we need more posts like Medina's that challenge these criticisms with the same confidence and sense of humor. We need to face these ridiculous, outdated attitudes head-on, with a fearlessness that says: "Yes, I am breastfeeding my child, providing them with the best nourishment I possibly can. What are you doing with your life right now? "